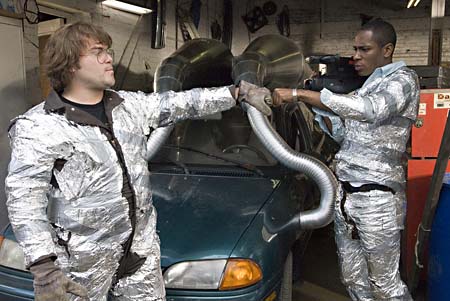 Michel Gondry, who is something of a visionary, doesn’t make artsy movies; he makes ’em craftsy, full of gadgets and gizmos and Claymation curios. But his last two narrative features – The Science of Sleep and recent release Be Kind Rewind, written alone and without two-time collaborator Charlie Kaufman or any other surer hand at story and structure – have allowed his wonder at the spectacle (a wonderful spectacle, to be sure) to dwarf each picture as a piece. Science of Sleep could be excused – it, like its creator, is so very French – but Be Kind Rewind has a very particular, very American aim: that is, to be a Capra comedy. Only it’s really not all that funny. The film labors to set up its central premise (one easily gleaned in its two-minute trailer): Video-store clerk Mike (Mos Def), left in charge of the ailing store of father-figure-like Mr. Fletcher (Glover), finds to his horror that his ne’er-do-well best friend, Jerry (Black, wild-eyed and insufferable), has accidentally demagnetized the entire store’s product. (The story behind Jerry’s accidental magnetization involves, in part, his paranoia of a local power plant and, in large, a whole lot of tedium involving Black swathed in aluminum foil.) In a panic when Mr. Fletcher’s lady friend (Farrow) requests Ghostbusters to rent, the pair scramble to remake their own 20-minute CliffsNotes version using homegrown FX and a condensation of parts (Mike plays Bill Murray, Jerry, everybody else). Faster than you can say viral video, Mike and Jerry’s scheme takes off, and suddenly the whole neighborhood is requesting remakes – or “swedes,” in the film’s peculiar parlance – of blockbusters like RoboCop and Rush Hour. After securing a helpmate named Alma (the lovely Diaz), the boys launch successive productions, each ingeniously DIY, and it’s here where Be Kind Rewind finds its footing and – as the neighborhood rallies, then crews – that Capra touch. Def would have fit right in in one of Frank’s small-town-boy-makes-good fables (well, save the fact that no black man would have ever been allowed to headline in Capra’s time): He’s gentle and funny, fumbling in his courtship of best gal Alma, and the best thing by far in Gondry’s well-meaning but too soft, too structure-less picture. The vision is there; so, I think, is the heart and most definitely the crafts – who woulda thunk a pan pizza could double as the blood-’n’-guts of a gunshot to the head? – but the craft … that still needs some refining.