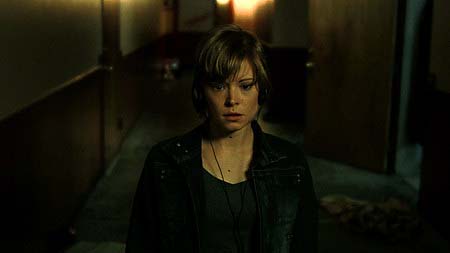 An outright horror film that nonetheless veers on occasion into surreal black comedy, The Signal (a favorite at last year's Sundance and SXSW Film festivals) takes Marshall McLuhan's famous statement "the medium is the message" to extremes not explored since David Cronenberg's seminal, frighteningly prescient Videodrome in 1983. (It also bears a striking resemblance in both story and tone to Stephen King's novel Cell, currently on its way to the big screen courtesy of Eli Roth.) Willowy blonde Mya (Ramsey) and Simon Pegg look-alike Ben (Welborn) are lovers who are apart when, without any explanation whatsoever, their friends and neighbors – including Mya's jealous husband, Lewis (Bowen) – go berserk and begin killing each other in graphic, violent, wholly inexplicable ways. The theory among the survivors is that a bizarre radio/television/cell-phone transmission is the source of the sudden explosion of random violence, but (as in George Romero's Dead films and his thematically similar, little-seen 1973 semigem The Crazies) exactly how or why this is happening misses the point. Divided into three interlocking stories, each helmed by a different director, The Signal is a shuddery critique of the ultrapervasive influence of big (and little) media on humanity and the paranoia engendered by its sheer invasiveness. It's also a snarky stab at the desensitizing aspects of everything, from horror movies (the film begins with what appears to be a Last House on the Left knockoff) to the slow and steady demise of the "good neighbor" concept. (Do you know the names of everyone on your block? And would you trust them with an ice pick during a crisis?) Midway through, as both the signal-deranged Lewis and a wounded Ben are pursuing the missing Mya, The Signal almost (but not quite) turns into an Upright Citizens Brigade sketch, as it slows down to take in the carnage – mental and otherwise – at a young couple's suburban homestead, where guests are arriving for a planned New Year's Eve party. Surprisingly, this ends up being the most unnerving slice of paranoiac nightmarishness in the film, with freakish hallucinations and ultraviolent death (and zany party hats!) as the order of the day. The Signal envisions a remarkably effective breakdown-of-society scenario on an obviously low budget and does it in a new and interesting way. True, Mya and Lewis' apartment setting looks to be straight out of the opening tenement sequence in Dawn of the Dead, but even that homage, intentional or not, only adds to the film's overall sense of claustrophobic doom. Both apocalyptic and suitably vague, The Signal's only serious weakness comes from some borderline histrionic performances; then again, it's tough to call hysteria anything other than a sane response to a world gone mad. Crazy, man.