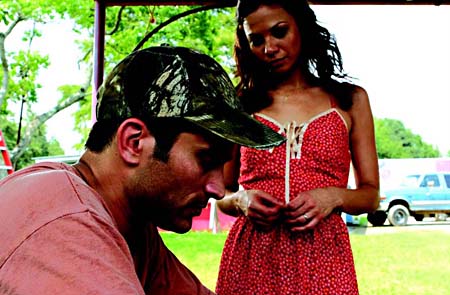 As far as I know, Little Chenier is unique in the annals of American film in that it is the only narrative feature to sink as deep as a dead gator into the virtually impenetrable Cajun culture of southern Louisiana without resorting to stereotype or hokey Southern Gothic by way of the bayou. Actually, it is, in its own sticky, humid way, a Gothic of sorts, and there's no shortage of melodrama in this tale of two brothers who run afoul of the local sheriff amidst the mossy waterways that provide an idea of what Venice might look like in a thousand years. (It's of woeful note that Little Chenier wrapped production just one month before Hurricane Katrina obliterated the entire coastal area where the film was shot.) Schaech plays Beaux Dupuis, who, with his mentally retarded brother, Pemon (a remarkably immersive turn by Koehler), sells shrimp from his houseboat and fishes the bayou, barely scraping by with a little help from longtime friend T-Boy (Collins Jr.). Beaux's true love, Marie-Louise (Braun), has recently married the aforementioned sheriff Carl (Davidson), whose only pleasure in life seems to come from tormenting his former rival. Like the Gothic tradition from which it springs, Little Chenier is crammed to bursting with snaking subplots, but the heart of the story is Koehler's childlike Pemon, whose high-pitched giggles and pleasantly addled world-view encompasses little else but his brother and the swamp outside their houseboat. Koehler's sing-songy performance may grate on some nerves, but it's a dead-on portrait of simple, genuine, brotherly love that, in the end, collides head-on with the harsh realities of keeping your head above water in a world where dry land and whole hearts are in short supply. Kudos to director of photography Tanja Koop, who makes this unseen world as real as the one outside your window. Rarely, if ever before, have the patois-laden Cajun natives of southern Louisiana been portrayed so realistically – so much so that subtitles are often employed to cut through their frequently impenetrable accents. It's of mice and men and gators and girls on a bayou now long gone. (Little Chenier premiered in Austin during the 2006 Austin Film Festival.) 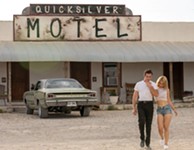 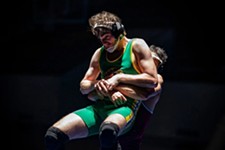