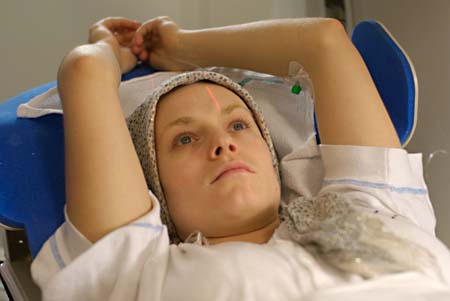 Be among the few who have a leg up in handicapping this year's Oscar results. This program affords the rare opportunity to see all five contenders in the Academy Awards competition for the best live-action short of 2007. (A companion program of the five animated shorts in competition plays separately.) Not only is it lovely that these programs of shorts have been granted valuable real estate on our crowded theatre screens, these programs also represent the supposed best the world has to offer. All five films hail from European countries and are indeed exemplary models of the short-film form. My ineligible vote, however, would have to go to the Danish film "At Night" by Christian E. Christiansen. Produced by Louise Vesth of Lars von Trier's Zentropa Entertainments, "At Night" is not a Dogme film, per se, but it shares with that movement a keen sense of minimalist melodrama. In it, three young women bond during their time in a cancer ward. Their dire health issues take a back seat to their candid relationships, which gradually reveal deeper issues regarding fear, loneliness, and self-reproach. However, clocking in at 40 minutes, it's debatable whether the work is actually a short film or an incomplete feature. It's compelling drama nevertheless. Another standout is "The Mozart of Pickpockets" by Philippe Pollet-Villard of France, in which honor among thieves takes an interesting turn. The Belgian "Tanghi Argentini" by Guido Thys is an excellent example of the O. Henry-like short-story model that provides a surprising twist at the end that casts the whole story in a different light. Daniel Barber's "The Tonto Woman" is a Western that arrives by way of England and is based on a story by Elmore Leonard. Although the film's subject matter (about a white woman who was recaptured by her husband after having been kidnapped by Mojave Indians and lived among them for 11 years) is fascinating, the execution leaves something to be desired. Andrea Jublin's Italian film "The Substitute," about a strange new high school teacher, is the least of the lot but still a solid work. It's cliché to point out, but all five are winners just by being nominated.