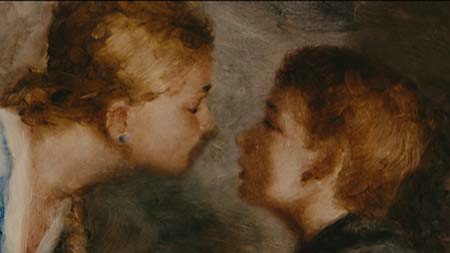 I’ve given up predicting the Academy Awards. Most years the wrong films are nominated, every year the wrong films win (as do the wrong actors, actresses, directors, editors, composers ...), and every year I grow more and more disenchanted. Thank God, then, for the Animated Shorts category, a collection of films that have the air of untainted artistic integrity about them, free from the promotional strong-arming, self-congratulatory politicking, and celebrity hullabaloo of full-length, live-action Hollywood. Watching these five nominated movies is like getting your movie-watching self clean again after years spent growing cynical. Take “My Love,” Oscar-winner Alexander Petrov’s story of a young man in 19th century Russia who falls for two women. Employing a rarely used (and painfully meticulous) animation technique involving pastel oil paintings on glass, Petrov creates a melting, mellifluous world that looks like a Degas painting brought to life and then reimagined as a dream. At once both high art and low burlesque, “My Love” uses visual poetry to capture the swirling erotic confusion and bodily desperation of adolescence and in the process creates its own entirely original vision of the world. Then there’s “Peter & the Wolf,” Suzie Templeton’s stop-motion adaptation of Prokofiev’s children’s story about a boy, his pet duck, and unforgiving nature. Unconcerned with sex but fascinated by confusion and desperation, this latest version of the classic tale is a triumph of emotional ambiguity and shifting loyalty and a rebirth for the full-bodied animated animal sidekick after years of Disney-declared comic purgatory. The three other films nominated this year – “I Met the Walrus” by Josh Raskin, “Madame Tutli-Putli" by Chris Lavis and Maciek Szczerbowski, and “Même les Pigeons Vont au Paradis” by Samuel Tourneux and Simon Vanesse – are all technical and artistic marvels, but if there’s any justice in the world, “My Love” will take home the gold statue. Of course if there’s one world that doesn’t care about justice, it’s the Academy of Motion Picture Arts and Sciences, so I’m probably just setting myself up for another disappointment.