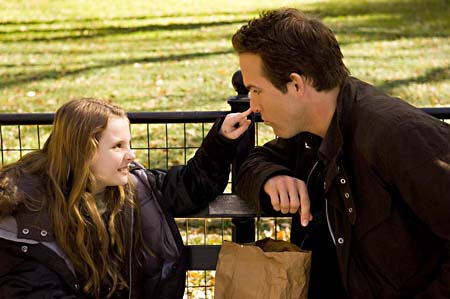 There’s a wishy-washiness to the title – which references a woman’s answer to one of several marriage proposals that political strategist Will Hayes (Reynolds) pops over the course of the film – and it's indicative of the film’s frustrating effect: For long stretches, it definitely works as an era-zagging retelling of Hayes' overlapping love affairs with three women. But then, when you’re maybe just about ready to fully endorse the film, it gives in to some generic romantic-comedy frippery that punctures a hole in its own believability. We begin in the present tense, as Hayes goes to pick up his daughter Maya (Little Miss Sunshine’s Breslin) from school; Tuesdays and Fridays are his, the rest of the week belongs to Maya’s mother (not yet seen, or named), from whom Hayes is separated. Maya’s a little spark plug (and Breslin is winning as ever), an inquisitive soul who wants Dad to tell her the story of how he met her mother. (Plot sound familiar? It plays Monday nights on CBS). Hayes agrees, with the caveat that he’s changing all the names and including the two other great loves of his life; Maya will have to figure out for herself which is the one she now calls Mom. (“I like it: It’s like a love story-mystery,” she says; it’s also a rather convoluted conceit that’s badly articulated to the audience.) The three loves include college sweetheart Emily (Banks), who’s left behind in Wisconsin when Hayes heads to the Big Apple to work for Clinton’s first presidential race; Emily’s college friend Summer (Weisz), a saucy grad student shacking up with her much-older thesis adviser (Kline, enjoying the hell out of himself as a turtlenecked boozehound, which is just one of the ways in which he is a dog); and April (Fisher), the sarcastic “copy girl” at campaign headquarters who keeps falling for bad boys. Writer/director Brooks (who previously penned trifles like French Kiss and Practical Magic) has written himself the romantic-comedist’s dream: endless meet-cutes, as Hayes meets and remeets these women over the years (even Maya’s got a bang-up entrance – we meet her, in a state of utter perplexity, shortly after an eye-opening sex-ed class). The problem is, with so many meet-cutes, there’s less time for actual, you know, character development. Too often, Brooks glosses over action that should be lingered upon, digs in when he should skim by, and quite simply can’t find the story through the trees. It’s still all likable enough – the cast is spot-on, and it’s easy for the audience, like Maya, to shift allegiance throughout (Weisz and Fisher are effortlessly charming, in very different ways). There’s a surprising – and truthful – melancholic undercurrent to Definitely, Maybe – the one commonality between the three women is the heartbreak they induce – but Brooks undermines that truthfulness with a dogmatic insistence upon romantic mythologizing. No maybes about it: The reality is far darker, and more interesting. 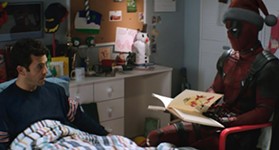