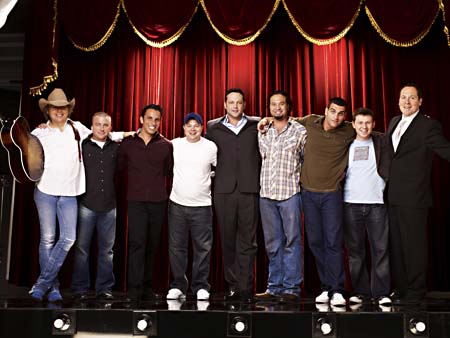 Back in September 2005, with his summer hit Wedding Crashers making money faster than studio heads could count it, Vaughn, the new king of Hollywood comedy, decided to put aside acting and try his hand at the impresario game. Gathering together four young stand-up comedians he had scouted at Los Angeles’ legendary Comedy Store, Vaughn jumped in a bus for a 30-day tour of the heartland, aiming to “bring great comedy to everywhere America,” “everywhere America,” of course, being anywhere that wasn’t California or New York (“Comics’ Schticks Big Hits in Stix!”). What tour-documentary director Sandel and his crew soon discovered was that Vaughn wasn’t only bringing comedy to Middle America; he was on a whole charm offensive, eager to give everyone from St. Louis to Cincinnati to Atlanta the chance to bask in the reflected glow of his success and mile-a-minute patter. As emcee of the Wild West Comedy Show, he took to the stage every night not just to introduce his comedy crew to the world but to celebrate the career of Vince Vaughn in bizarre, self-indulgent displays: He called Justin Long (Accepted) up onstage to re-enact a scene from Swingers; he and his Crashers co-star Keir O’Donnell rekindled their twisted homoerotic push-and-pull as part of an audience-participation gag; he even restaged a scene from a long-forgotten afterschool special he starred in with his friend (and one of this film’s producers) Peter Billingsley (A Christmas Story). Onscreen it all plays out like some sort of self-coronation, a celebration of the boy Vaughn’s rise to the heights of superstardom, which is odd considering there are four comedians that he hired waiting just offstage who would kill for a small taste of even regular stardom. To be fair, however, those comedians (Ahmed Ahmed, John Caparulo, Bret Ernst, Sebastian Maniscalco) are probably still a ways away from that kind of success. Aside from Carapulo, who traffics in his own idiosyncratic blend of self-deprecating absurdity and sexual desperation, they’re mostly from the aren’t-men-and-women-different, aren’t-parents-crazy, isn’t-racial-misunderstanding-adorable school of comedy. There are few social observations you haven’t heard a thousand times before, and apart from Ahmed’s riffs on the difficulties of being Arab in post-9/11 America, there’s exactly zero controversy of any kind, which is a shame considering the tour came face to face with Hurricane Katrina and its now-infamous political fallout en route to New Orleans. Instead, you get four decent comics plucked from obscurity and given a once-in-a-lifetime opportunity to play big venues packed with eager fans who would probably have roared at a 20-minute set by Alan Greenspan if Vaughn had deigned to give him his blessing. 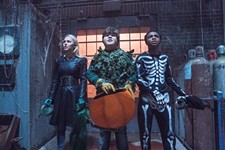 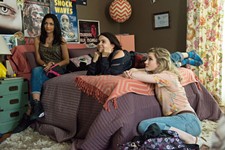