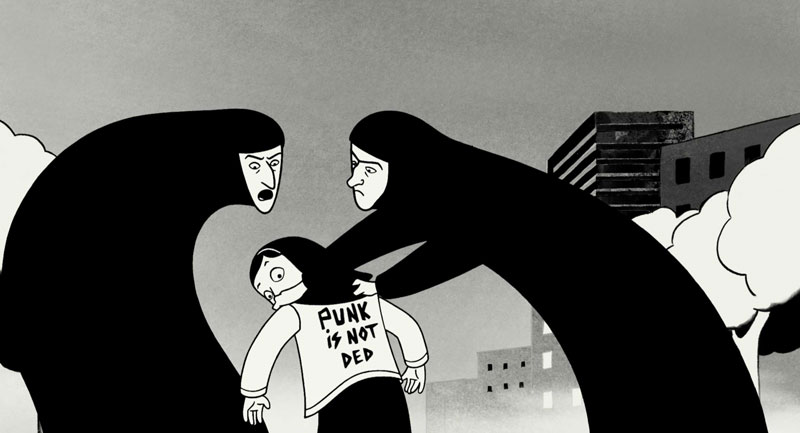 Persepolis is at once a confessional autobiography, historical re-enactment, graphic art object, and deeply involving contemporary story about a girl’s coming-of-age while circumventing not only the usual pitfalls of adolescence but also the enforced repression brought on by Iran’s Islamic revolution of the Eighties. Satrapi’s story, which she and Paronnaud adapted into an animated film from her graphic novels, is both specific and universal, and therein lies a large measure of its appeal. Marjane (voiced by Mastroianni) is a young Iranian grade-schooler when first we meet her in 1978. A daughter of the middle-class intelligentsia, Marji, as she is called, is a feisty young thing who resembles children the world over in her love for Bruce Lee, Nikes, and rock & roll. Then, in short measure, she witnesses the fall of the Shah’s ironclad regime and its replacement by Islamic state rule. Suddenly, the adolescent’s awkwardly changing body is forced under a veil, the official history in her textbooks is rewritten, and an independent-minded uncle who had been merely jailed and tortured by the Shah’s secret police was now executed by the new religious dictatorship. The film’s first half-hour provides a rich framework for understanding the history of Iran in the 20th century, albeit from the perspective of a little girl who is our surrogate vessel for absorbing the era’s information, propaganda, and mixed signals. Eventually, Marji’s parents send her to Vienna to continue her schooling and escape the repression in Tehran. There begins a rather picaresque tale of further maturation; in Vienna she becomes a different kind of cultural outsider yet still victim to the slings and arrows of pained adolescence. “I had survived a war, but a banal love story nearly killed me,” she comments sardonically after she suffers the tragedy of a doomed love affair. Ultimately, she returns to Tehran, where she continues her anguished journey toward adulthood before finding her authorial voice. In ways, Marji reminds me of Ghost World's Enid, another self-directed cartoon gal who made the transition from page to screen with all her transgressive spirit intact. The film’s flat, mostly black-and-white animation helps convey some of the sense of a graphic novel, but moreover, the visual look complements the story’s moral sphere, a realm governed by absolute rights and wrongs and lots of gray in-between areas. Black blobs can morph into morality militias, or they can depict the furtive pallor of the black-market street vendors whom one turns to for their Iron Maiden albums or the deep, black hole of depression one sinks into when you literally can’t hold hands or let your hair down in public. As befits a coming-of-age story, there are a couple of indulgent passages, but they hardly get in the way of the overall flow. Though you might have a hard time discussing some of the film’s verbal descriptions of torture with young ones, Persepolis will prove a worthwhile movie for thoughtful teens. They are likely to discover that their plight may be universal, but their circumstances are always unique. And, oh yeah, the personal is always political. 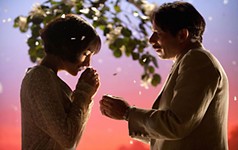 Chicken With Plums
From the makers of the animated Persepolis comes this modern-day, live-action Arabian tale.