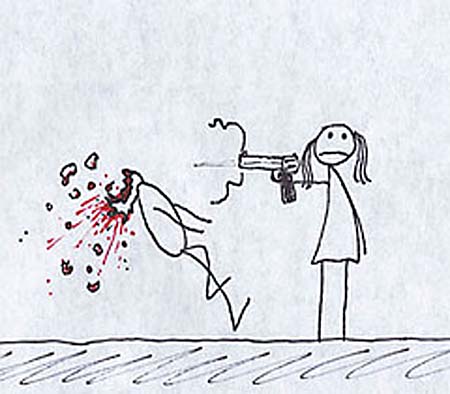 I hate to say it but it's true: Spike and Mike's annual theatrical tour of cartoon masturbation, defloration, and any and all animated aberrations calculated to induce titillation and/or bowel elimination, is no longer the shit. That observation is unlikely to register with fans of mainstream animation, nor is it likely to evoke melancholy in PETA members or those among us tragically devoid of necks. But the fact remains that the California-based duo of Craig "Spike" Decker and the late Mike Gribble aided or abetted the careers of everyone from King of the Austin Hill Mike Judge (his 1992 short "Frog Baseball" earned him no ASPCA fans but won the hearts and minds of inner-10-year-olds everywhere) to Powerpuff Girls creator Craig McCracken, whose inexplicably hilarious "No Neck Joe" was an S&M staple for the better part of the last decade. And do I even need to mention Don Hertzfeldt's 2001 Oscar nod for his existential stick figure opus "Rejected"? Spike and Mike accepted it long before the Academy denied it. Which makes the pall of mediocrity that hangs over this year's Sick & Twisted Festival all the more dismaying. The fault isn't due so much to the uneven programming – like kangaroo gangbangs, Spike and Mike's shows have always been pretty hit-or-miss – as it is to the not-quite-overnight arrival of YouTube and similar websites that allow easy access to content (animated or otherwise) that back in those halcyon, pre-Web 2.0 days could only be discovered via the likes of Spike and Mike or lousy, 10th-generation VHS dubs. Now, too, edgy animation sites like SuperDeluxe.com give budding Ralph Bakshis the world over a direct line to massive online audiences. (Weirdly, two Super Deluxe-affiliated shorts, Brad Neely's transcendent, absurdist "Washington" and Bob Ray's reverse-Darwinian "Ape Shit," are also part of Spike and Mike.) There are, actually, a couple of gems here: Plug Ugly Films' "We Live on Your Street" is just flat-out cool, utilizing a spiral-bound notebook as the background for some seriously manic stop-motion animation and the Willowz zippy suburban-punk anthem. Argentina's Juan Pablo Zamarella deconstructs theology and casts nuns in a whole new, black-and-white light with his clever "Lapsus," while Apocalypse Cartoons' "Rats on Cocaine: Pregnant" is exactly as morally instructive as it sounds. Still, there's a notable paucity of memorably mind-warping moments in this year's show. In a subterfuge reminiscent of shockmeister John Waters' remarginalization by an increasingly unshockable public, online pop culture and the likes of Cartoon Network's Adult Swim have caught up with (if not yet surpassed) Spike and Mike's unique brand of old-school, roadshow ballyhoo. Connoisseurs of interspecies money shots ("Chirpy") and Hertzfeldtian heartache ("Ah, L'Amour") are the poorer for it. (Ends Sunday.)