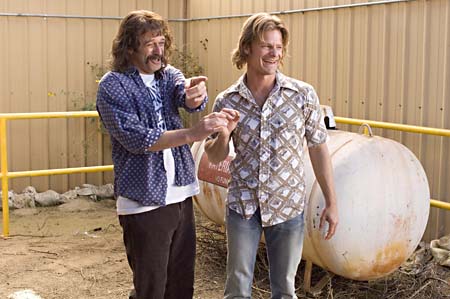 Early on in this shambling comedy about a nature show struggling to avoid the network's mighty axe of cancellation, the show's host, Peter (Zahn), grumbles when his lines are delivered to him on bar napkins. Art imitating life, perhaps: This one has the feel of being penned on rolling papers, with room to spare. Looking for a ratings boost, Peter crams his crew of degenerates, doofs, and weed-enthusiasts into a double-wide and hits the road in search of Bigfoot. That crew, by the way, includes Long and Hill, who are being positioned as two starters in the next generation's Dream Team of Comedy. Nothing they do here really furthers their cause, although one does wonder what particular strain of ganja possessed Hill to take on an accent lifted wholesale from PBS's gone-but-not-forgotten Cajun Chef. Director/co-writer Wolf and co-writer Peter Gaulke both hail from Saturday Night Live (the film was produced by Adam Sandler's Happy Madison), and they've inadvertently fashioned their film after your typical SNL episode: 90 minutes of marginally amusing stuff with the occasional bust-a-gut moment so absurd, so inspired, you wonder if it was an accident. There is, of course, a lot of other nonsense to wade through – shark attacks, ruthless pygmies, and a turkey that mounts, face-first, on Zahn's johnson, then freezes up. (At first, the gag is revolting, but kudos to all parties involved for stretching it out so long, so excruciatingly, that it finally browbeats you into submission, then laughter.) Running throughout is footage from the nature show: Coupling a Seventies-era, public television aesthetic with Peter's earnest-sounding, nonsensical voiceover narration ("monkeys make up more than 80 percent of the world's monkey population"), it's the most consistently funny motif in the film. But consistency isn't much a concern of Strange Wilderness, and neither is commitment: The boys break character and crack up before the last scene has even finished unspooling. Glad somebody's having a good time. 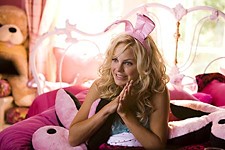 The House Bunny
A Playboy bunny who's been ejected from the mansion becomes a sorority house mother.