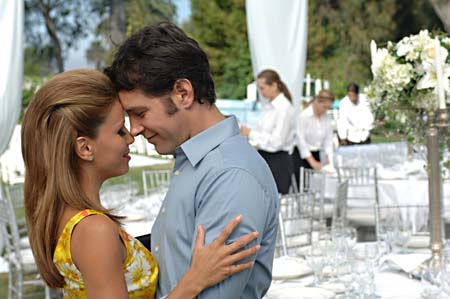 Over Her Dead Body

There’s just no end to America’s love affair with blandness, is there? Every time some new middle-of-the-road romantic comedy arrives onscreen to dredge the bottom of the cinematic barrel, I hope and pray that audiences will rise up, throw away their $8 buckets of popcorn, and stomp out of theatres in a huff (or a minute and a huff, as Groucho Marx would say) to demand something new and fresh. But it never seems to happen. Somehow Kate Hudson and Matthew McConaughey and Jennifer Aniston still have careers, and somehow our expectations of the genre just keep dropping and dropping, from the heights of George Cukor and Woody Allen down to Nora Ephron and Rob Reiner, and then down further to the perfect mediocrity of Lowell and Parker, the brains and the beauty behind Over Her Dead Body. San Antonio Spurs superfan Parker plays Kate, a bitchy monster of a bride-to-be who gets her comeuppance when an ice sculpture falls on her head on her wedding day. But not even death can stop a force as vindictive as Kate. Instead, she returns to earth in spirit form to keep an eye on her fiancé-in-mourning, Henry (Rudd, cashing in), and to wreak supernatural havoc on an attractive psychic (Bell) who’s using her gifts to wrangle Henry into bed. It’s not a bad premise for a movie – rich with the delicious possibilities of transmortal combat between an embittered, but deceased, woman and her usurping rival, who has the distinct advantage of being alive – and in the right hands it could have been something. Imagine what Rosalind Russell and Norma Shearer could have done with such roles, or Katharine Hepburn and Lauren Bacall, or even Salma Hayek and Regina King. Just think of the dialogue Billy Wilder or the Coen brothers could have written. Instead we get Parker and Bell, who approach their performances with all the comic agility and screen presence of supermodels on their first acting gig, and Lowell, who cut his teeth writing for god-awful sitcoms like The Drew Carey Show and Just Shoot Me and who apparently never met a daytime-TV-talk-show verbal slap-down he didn’t find hilarious. Where Over Her Dead Body should soar with blistering verbal gymnastics, it limps with empty sass about weight gain and skin blemishes; where it should race with inventive comic set-pieces, it slogs with extended flatulence sequences and gags about lifting overweight dogs. Where it should stop, it begins; where it should vanish, it will just keep on appearing, in theatres, on entertainment-news shows, in video stores, on and on, world without end.