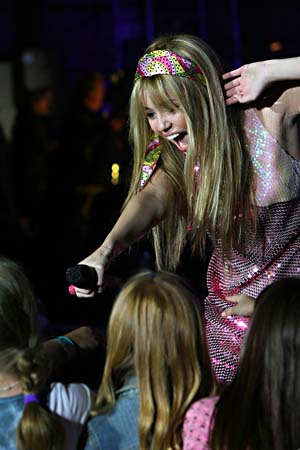 “The men don’t know, but the little girls understand.” The phrase’s application here might not have the full meaning that bluesman Howlin’ Wolf intended, but it still seems apt. The Hannah Montana phenomenon belongs to the kids, belongs to the preteen girls who have made this Disney TV character (and her real-life alter ego, Miley Cyrus) the current pop princess of the realm. All hail. And in 3-D, no less. Cyrus (the daughter of “Achy Breaky” Billy Ray) is a natural-born performer, and the ability of someone as young as she to bewitch stadiums full of fans is indeed a true marvel. And now that those modern-day Mouseketeers have turned a tad feral, Cyrus has been handed the palace keys to the Magic Kingdom. Disney put her in the hands of primo tour director Kenny Ortega (some of whose previous triumphs have included choreographing Madonna’s “Material Girl” video and the film Dirty Dancing and directing High School Musical 1 and 2). Cyrus' costumes sparkle, her energy is boundless, her teeth are perfectly straight and white, and she does have a modicum of talent which appears to be exploited to the nth degree. Whether any of this deserves bringing out the 3-D cameras, which contribute nothing but extra sparkle and razzamatazz, is debatable. Yet the show delivers with its corps of dancers, backup singers, elaborate runways, and a couple of tunes by boy group the Jonas Brothers, who do their thing while the fictional Hannah makes the backstage transition into the flesh-and-blood Miley. And if you're at all worried about Disney's exploitation of another child star, never fear: The company is an equal-opportunity exploiter. A ticket to the movie event will run you $15, twice the going rate for your average 74-minute movie. The movie's successful run has been extended from its original one-week limited booking.