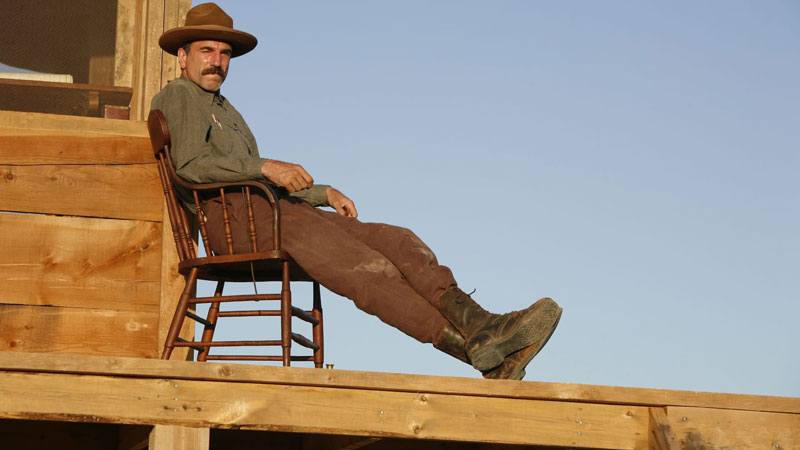 “No movie this year was more rooted in the American soil than this powerful character study and origin story.” That’s what I wrote a couple of weeks ago when I had space for just a few words to explain why There Will Be Blood earned the top slot on my list of the Top 10 films of 2007 ("There Will Be Film," Jan. 4). Opening at the dawn of the 20th century, this film epic is a compelling portrait of capitalism gone mad and the collective shams we hold on to as truths. Anderson’s saga is one that rivals films like Giant and Citizen Kane in our popular lore as stories about how we came to be the people we are. Ambition and greed drive the ascent of Daniel Plainview (Day-Lewis), a gold-prospector-turned-wildcatter-turned-oil-tycoon. As in another American classic, The Treasure of the Sierra Madre, it's not the gold that destroys men's souls but greed; in There Will Be Blood, the commodity that drives the greed is oil. Anderson, the director of such culture-rattling films as Boogie Nights and Magnolia, here tones down his signature visual and narrative flamboyance in favor of a more classically composed story, while leaving intact the trenchant omniscience of his storytelling. Loosely based on the early pages of Upton Sinclair's Oil!, There Will Be Blood is steeped in the origins of America's love affair with fossil fuels. (Is it a stretch to say that Anderson is evoking the Bush dynasty in the initialized name of Plainview's son, H.W., wonderfully played by Freasier?) The film also tackles America's reliance on faith and the gnarled intersection between pragmatism and belief. At its most forthright, however, There Will Be Blood is a rich character study of a fascinating individual who is by turns likable, loathsome, admirable, monstrous, and driven. (Again, perhaps an American archetype and exemplar of our eternal conundrum as a nation.) Of course, what Day-Lewis brings to the characterization is more exquisite and complex than anything even Anderson might have imagined at the outset. His Plainview is, hands down, the most gripping film performance of the year, and as his religious foil, Dano also reveals unsuspected depths. Essential to the movie is the original score by Jonny Greenwood, the Radiohead guitarist and BBC composer in residence. Before we even see a single image onscreen, the film opens with Greenwood's recurring musical motif that's not unlike the sound of an insect trapped inside one's cranium, buzzing insistently, unquelled, and ever louder. Although There Will Be Blood follows a fairly standard structure for a decades-long personal saga, Anderson's stylistic flair can be witnessed in his opening and closing sequences. The 20-minute opening sequence is a near-wordless introduction to Plainview's personality (no small feat there) and a précis on the physical challenges and techniques of mining the earth. It is here that the movie stakes itself incontrovertibly in the American soil. The closing sequence delivers on the promise of the movie's title in a manner that keeps viewers discussing it long after the picture ends. There Will Be Blood is not a movie that disappears quietly.