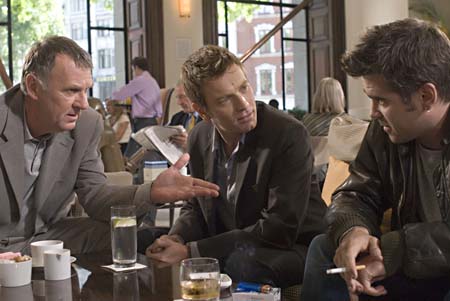 At this point, I guess we should just applaud Allen for his work ethic. Even at the ripe old age of 72, he’s still making movies at the rate of one a year, come rain or come shine. The problem, of course, is that he doesn’t make good movies at the rate of one a year. In fact, by my count, he hasn’t made a good movie for almost a decade (1999’s Sweet and Lowdown), which is fine if you’re Terrence Malick, but it makes lifelong fans of Allen (myself included) wish he’d just give up being prolific, put away his camera, and take up watching the New York Knicks full time. With any luck, his quickly fading legacy can still be salvaged. Cassandra’s Dream is the former master’s latest plunge into irrelevance. Like 1989’s brilliant Crimes and Misdemeanors and 2005’s considerably less brilliant Match Point, Dream is a meditation on the consequences of immorality, this time the murder of a London man by two affable but down-on-their-luck British brothers, Ian and Terry (McGregor and Farrell). Goaded by a rich uncle (Wilkinson) to do the deed in return for enough money to set both their lives straight, the brothers respond by indulging in lengthy discussions about the nature of evil and weighing the benefits of financial security against the risks (both of legal and spiritual) of cold-blooded murder before finally getting down to the bloody business. McGregor and Farrell do their level best to communicate some of the philosophical ambivalence and moral murkiness that accompany acts of brutality, but they’re up against inertia working with Allen. It’s old news to say the director likes to take a hands-off approach with his actors and avoid rehearsal in the name of a speedy shoot (both the film’s stars have commented on this to the press, with McGregor praising his boss for allowing him to be home by 4:30 every afternoon and “have a life”), but there’s a fine line between “hands-off” and total disengagement, and Allen has tumbled (Buddha-like) right over it. In Cassandra, his actors look like they’re all seeing the script for the first time and so have no clue what their characters’ personalities or motivations are. And the result is like some guest-celebrity scene-reading in a college acting class, with McGregor spouting lines like, “I’m taken aback,” and, “I’m stunned,” with all the conviction of a cuckoo clock and Farrell changing personalities every time he opens his lips to speak. I don’t know if I’ve ever seen actors look so lost. Strange to say, but after 40 years in the business, it seems Allen has forgotten everything he’s learned about making movies.