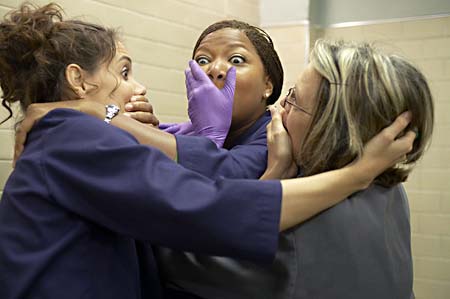 Move over, Gordon Gecko: The new poster boy for American greed in the movies isn’t a silver-tongued corporate hustler with pomaded hair and a closet full of $10,000 suits. In fact, the new poster boy for American greed in the movies isn’t a boy at all. I know you won’t believe me when I tell you, but you’ve been replaced by Diane Keaton. That’s right: Little Annie Hall has grown up and traded in her quirky vests and aw-shucks Midwestern naivete for some good old-fashioned late-capitalist avarice. For Keaton’s upper-middle-aged, upper-middle-class suburban housewife-turned-bank-robber Bridget Cardigan, greed isn’t good because it’s good for America or good for the species; greed is good because it’s good for her. How’s that for evolution? In Mad Money, Thelma & Louise screenwriter Khouri once again sets her sights on scorned women getting their revenge on a callous society, but the goal here isn’t freedom; it’s opportunity, vindication, good times, and the promise of bottomless bags filled with cash money. Bridget is a wealthy woman whose world comes crashing down after her husband, Don (Danson), loses his job and they’re suddenly faced with the prospect of bankruptcy. To make ends meet, she takes a job as a janitor at a local federal reserve, where she realizes that the bank’s endless supply of soon-to-be-shredded bills presents the perfect opportunity for a brash, enterprising woman dangling from the lowest rungs of the employment ladder. Enlisting the aid of two of her fellow danglers – one a single mother named Nina (Latifah) looking to give her kids a better life, the other an attractive, young space cadet named Jackie (Holmes) looking for more quirky trinkets for her trailer home – Bridget concocts a heist that succeeds in relieving the bank of millions of dollars while changing the three thieves’ lives for good. If Mad Money had stopped there, there’d be nothing much to talk about. Just another lightweight comedy about women dabbling in the fleeting pleasures of self-indulgence before retreating behind life lessons about the emptiness of material gain and the true and lasting joys of spiritual fulfillment. But Mad Money is less a movie than it is an advertisement for unfettered capitalism, with a hero who wants, desires, covets, and takes without shame or apology. Nina may be trying to help her kids, and Jackie may be trying to find herself, but Bridget’s mantra is “more, more, more” – more jewels, more cars, more flat-screen TVs – and she’s not above lying, cheating, stealing, or even pimping to get what she wants. Just when I thought there was no way a movie like this could possibly show me anything new, Money goes and makes Ivan Boesky out of Annie Hall, paints redemption green, and paves the road to heaven with gold. Color me surprised. 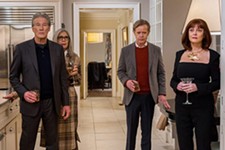