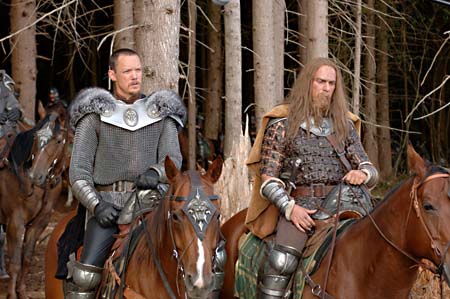 In the Name of the King: A Dungeon Siege Tale

Who among us can explain the enigma wrapped in a riddle surrounded by fierce, ravening, razor-toothed conundrums that is German director Uwe Boll? And who would want to, given that Boll's steady output of terrifically awful cinematic adaptations of video games (House of the Dead, Alone in the Dark, BloodRayne) has earned him a place in the rarefied strata of So Bad It's Good filmmaking? In a way, Boll is Chuck Norris' through-the-looking-glass Teutonic doppelgänger, armed as he is with a crushing battery of B- and C-grade genre films that sustain a rabid fan- and anti-fanbase and the physical ability to knock your block off with a single blow. (In 2006, "Raging" Boll challenged his media critics to get in the ring with him and go 10 rounds; several did, and Boll, a former amateur boxer, cleaned their clocks so well they'll never need winding up again.) He funds his own productions, including the as-yet-unreleased Postal, which debuted, with Boll on hand, at last year's Fantastic Fest, and he has what appears to be a tireless work ethic. That said, his films (excluding the atypical Postal) continue to be notable for their sheer badness – it's as if someone had thrown a whole lot of money at Ed Wood and let him go wild, minus the angora. The sword-and-sorcery suckiness of In the Name of the King is primeval Boll material, rife with casting choices so inscrutable (Burt Reynolds?!) you'll be wondering who slipped the LSD in your Coke, cheesily bad CGI effects, and enough frenetic, semiepic battle sequences – expertly staged by Tony Ching but inexpertly shot by Boll's longtime director of photography Mathias Neumann, who apparently welded his camera to the end of a broadsword in a fit of cinema vérité – to give Spartacus a run for his money. One look at the eclectic cast Boll has assembled should pique any genre fan's interest and, to be honest, it's worth a look if only to revel in the unholy glory of Liotta's Snidely Whiplashing eyelashes. Unfortunately and predictably, the vaguely medieval story, which has Statham's craggy Farmer (who is, literally, a farmer) turning from plowshare to sword after his son is killed by a marauding army of snaggle-toothed "Krugs," makes about as much sustained narrative sense as, well, a video game. What more need be said? Fans of Merchant Ivory will explode on contact with Boll's insistently scattershot filmmaking, but Boll's fans are already awaiting BloodRayne 2 and 3. 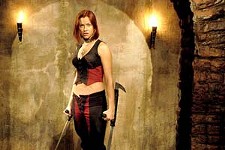 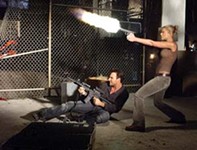 Alone in the Dark
There's a certain majesty to German director Boll's style of filmmaking: a freedom from art, talent, skill of any formal kind, and the sheer pigheadedness to keep going at any cost.