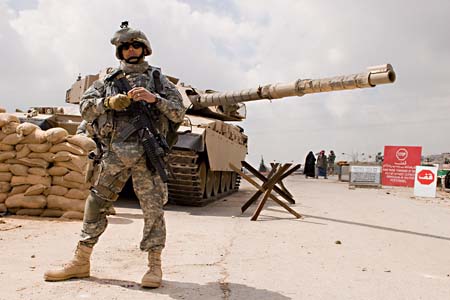 In the opening and closing credits of this film, De Palma provides a visual explanation of the meaning of the word "redacted" by blacking out or otherwise editing words and/or images on the screen. During the opening credits, the choice to edit the material was his; in the moving closing credits (which is a series of photos of Iraqi war dead) the choice was not the director's but his distribution company's in an attempt to protect the anonymity of the victims. The issue of the director's work ironically becoming a subject for redaction pales in contrast to the passion De Palma brings to this movie. The fate of Redacted is small potatoes compared with what De Palma regards as the U.S. government's wholesale obscuring of the truth about the war in Iraq. His film is as stylistically raw as his emotions. The story is a fictional account of the events in Samarra before, during, and after the actual rape and murder of a 15-year-old girl and her family by American soldiers. De Palma uses documentary techniques in order to tell his fictionalized tale. In many aspects, Redacted echoes De Palma's 1989 Vietnam War film, Casualties of War, in which Michael J. Fox plays a soldier whose conscience won't permit him to go along with his unit's cover-up of a rape and accompanying atrocity. In the new film, De Palma uses various camera truths to piece together the narrative. The bulk of the film is seen through the lens of the camera wielded by Angel Salazar (Diaz), a grunt who hopes to use the film he makes of his buddies in Iraq as his entrance portfolio into film school. The cutaways from Salazar's video are to images caught through a variety of means: the base's security cameras, a website created by jihadists and another by a military wife, a film being made by French journalists that just happens to focus on Salazar's unit, footage from embedded journalists, and even the video of Salazar's psych evaluation. The impression De Palma leaves is that the more images we have to look at, the less we see and comprehend. Yet De Palma too falls victim to the shorthand of images. The use of stereotypes is prevalent throughout Redacted, whether it is the racism and primitivism of the American soldiers, the arty pretensions of the French, or ultimately, the perfidy of the American government. Also, the dramatic skills of the movie's group of unknown actors are not well enough honed to express narrative nuances. Despite its shortcomings, Redacted is nevertheless a film brimming with spontaneity and fury, and in a season of often-ambiguous films about the war in Iraq, there is a lot to be said for this kind of combustible energy. (Ends Monday.) 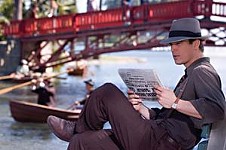