At the risk of ticking off producer Guillermo Del Toro, the Spanish shocker The Orphanage is no Devil's Backbone. It's hardly spineless, so to speak, but neither is it on par with several of the other películas asustadizas from which it borrows heavily, either in tone or tale, chief among them The Omen, Alejandro Amenábar's The Others, Mario Bava's Kill, Baby … Kill!, and at least a deuce of Dario Argento gialli. (Okay, The Orphanage trumps Richard Donner's hysterical Omen, fair enough, but it also rips off that film's infamous birthday-party sequence almost shot for shot.) It's got neo-Gothic style to spare and a dense, suffocating atmosphere in which Henry James could gleefully asphyxiate, and, too, it strives mightily to have a heart in the midst of all the miasmatic, ghostly goings-on. To paraphrase Psycho author Robert Bloch, it may have the heart of a small boy … but it's in a jar, on a desk somewhere … else. The rhythmic, emotional throb and thrum that lie at the center of Del Toro's best work are oddly absent from The Orphanage, which is otherwise plainly inspired in large part by Mexico's most eloquent director of the eerie and outré. It may be an exquisite corpse, but it's still DOA. Nonetheless, Bayona and his cast (abetted by the ominously beautiful cinematography of Óscar Faura and Josep Rosell's suitably lachrymose art direction) pull out all the stops, and for a while, you're immersed in the increasingly creepy story of married couple Laura (Rueda) and Carlos (Cayo) and their adopted, terminally cute son, Simón (Princep). When the latter inexplicably vanishes during a celebratory party for his parents' grand reopening of the titular orphange (Laura's long-ago home, as it turns out), the film opens wide the floodgates of unease, and suddenly this sunny, seaside manse is doing double duty for Hill (or Hell, take your pick) House. There's a disquietingly amusing sequence involving the stick-thin Chaplin and the vast Vivar as a sort of Laurel and Hardy-esque psychic-investigation duo and a terrific and abruptly shocking turn by Carulla as a myopic, utterly mesmerizing mystery woman from Laura's girlhood; really, across the board, the acting is never less than superb. Sergio Sánchez's lyrical, occasionally poetic script is played out in a tragic key that feels far too minor, but there are way more than seven black notes here (despite one genuinely ghastly moment that rivals anything Lucio Fulci ever splashed onscreen), and ultimately the composition comes off as both overplayed and underdone. Bayona – while clearly a director of enormous talent – exerts too much obvious effort to foster our sympathies as completely as this emotionally nuanced story requires, and it all ends with what should be the bang of your heart pounding clean out of your chest but feels more like the fidgety whimper of restless kids with nowhere else to go. 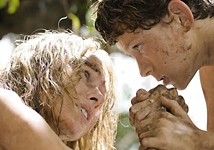 The Impossible
The sound and fury of the Christmas tsunami is deeply harrowing as shown here through the microcosm of one family's experience.