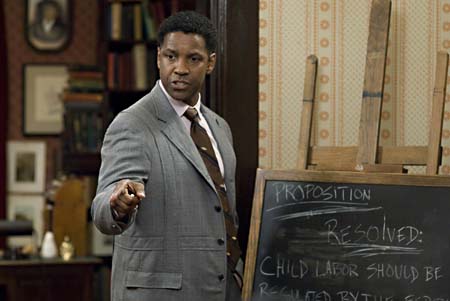 In his second outing as a director, Washington chooses an inspirational story, yet even though The Great Debaters is a historical story worth telling, the film is hobbled by the narrative predictability that inevitably governs this type of drama. Like his first directorial effort, Antwone Fisher, The Great Debaters is based on a true story in which Washington casts himself in the role of the elder leading man, the guiding figure who helps characters from the younger generation overcome the damage of their past and grab hold of the opportunities for their future. Although Washington is perfectly fine in his performance here as the professor and coach of Wiley College's national-championship-winning debate team in 1935, the role calls for no special showmanship on the part of the dependably brilliant actor. So, too, as the director, Washington brings no special stylistic flourish to the film, instead placing himself at the straightforward service of the Oprah Winfrey-produced story. He plays the role of Melvin B. Tolson, who coaches to victory the all-black Wiley College debate team, which goes on to become the first black team to debate white opponents before riding its winning streak all the way to Boston to unseat the reigning champions at Harvard. The small Marshall, Texas, college is set in the Depression-era, Jim Crow, union-busting South, and the film's atmospherics capture the milieu with striking detail. It is a time and place where segregation is the norm, and lynchings still occur, although the students represent a new generation that has been raised to believe it can beat the odds stacked against it. The debate-team members are also a distinctive group: Henry Lowe (Parker), an antsy scholar who wages a constant battle between his intellectual pursuits and his tumultuous instincts; Samantha Booke (Smollett), who is not only the first black student to enter these debates but the first female black student, as well; and James Farmer Jr. (Denzel Whitaker – no relation to Forest Whitaker, who plays his father, a daunting figure who is one of the South's few African-American Ph.D.s), who is younger than the others and experiences some of the period's harsher race lessons more intimately. (Farmer Jr. grows up to found the groundbreaking antisegregation organization CORE.) The film follows a standard sports-movie structure in which the underdogs fight their way to success. But unlike a sports movie, the key to victory is education and knowledge, mastery of the speaker's lectern rather than a wicked right hook or jump shot. (Opens Tuesday, Dec. 25.) 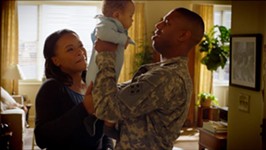 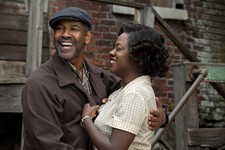