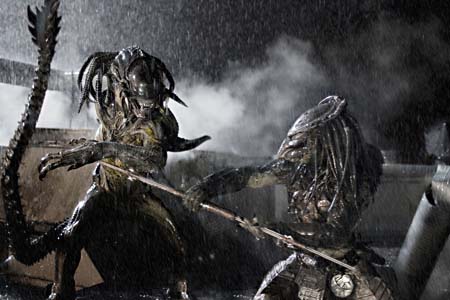 What can I say about the extraterrestrial bloodbath Aliens vs. Predator: Requiem except that I think the book was better? This sequel to the much-maligned (though, to be fair, probably just misunderstood) Aliens vs. Predator is an orgy of mindless violence, a random collection of bloody bodies, alien misanthropy, and slobbering carnage designed to bore straight into the pleasure centers of 13-year-old boys and leave the rest of us wondering when the movies got so damn loud. I won’t go too deeply into the film’s plot because I don’t want to ruin it for you, but I can tell you that a UFO carrying a pack of salivating aliens like those that tormented Sigourney Weaver back in the Eighties crash-lands in the woods outside a small town in Colorado, followed by the arrival of a predator (of the dreadlocked variety that tormented Jesse “the Body” Ventura back in the Eighties), who’s hunting down the aliens one by one. Needless to say, it isn’t long before the first human being gets caught in the cross fire and there are severed arms and disemboweled bodies all over town, not to mention the occasional skinned corpse left drip-drying from the limb of an oak tree, occurrences that lead the local sheriff (Ortiz) to conclude that something could maybe, possibly be amiss. Cue the local ad hoc militia full of walking, talking movie clichés, and you’ve got yourself a donnybrook: Aliens vs. Predator vs. B-Movie Thespians. I can’t say for sure what the “Requiem” in the film’s title refers to, though we can only hope it means it will be the last in the series. More likely, though, it has to do with the movie’s tone of apocalyptic ruin and its absurdly high body count. Say what you will about this artless, joyless gore fest, but pretty much everyone is dead by the time it’s over – men, women, children, aliens, predators, priests, rabbis, mullahs – so at least its creators can’t be accused of playing it safe. That’s okay, though, because there’s so much else they can be accused of, like shooting every scene in almost total darkness, so it’s impossible to tell who’s fighting whom and why; like turning up the sound effects so loud that viewers can’t hear themselves think; like making a movie that’s most effective if its viewers don’t think. Am I sounding old yet? Oh, to be a teenager, now that Aliens vs. Predator: Requiem is here. 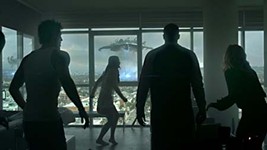