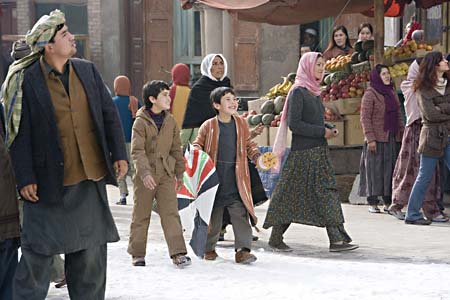 Adapting a bestselling novel like Khaled Hosseini’s The Kite Runner for the screen is often a tricky proposition: Do the filmmakers slavishly adhere to the literary source to satisfy the expectations of a built-in audience familiar with the book, or do they aim to make a stand-alone movie that just happens to be based on a popular piece of fiction? In other words, it can be a matter of damned if you do, damned if you don’t. The screen version of Hosseini’s phenomenally successful novel about friendship, betrayal, and redemption, set against the turmoil in Afghanistan during the last 30 years, is an example of how good intentions don’t necessarily make for a good movie. Screenwriter David Benioff and director Forster are faithful to the novel to a fault, retaining a level of narrative detail that bogs down the principal storyline about a haunted Afghan-American man who is blessed with the chance “to be good again” and rectify a wrong he committed years ago. The film’s early scenes establishing the boyhood bond between the privileged Amir and the servant’s son Hassan effectively set up the tragic turn of events that forever separates the two, both in the physical and the emotional sense. As the simple and loyal Hassan, young Mahmidzada is perfectly cast – his eyes are expressive beyond their years, and he projects the inherent goodness essential to the role. But as the film progresses, the narrative focus gets diluted and never really recovers, even when the grownup Amir returns to his native country, a ruined place he no longer recognizes. Some of the improbabilities in the third act of Hosseini’s book seem even more unlikely on the screen – the villain is a sadistic pedophile high in the ranks of the Taliban government – and the thematic essence of the film is equally marred by the heightened melodramatics that undermined the last third of the novel. Still, the kite-fighting sequences here are magnificent, staged and shot by Forster like aerial dogfights in which fluttering constructions of paper and string do battle in the sky. (Alberto Iglesias’ beautiful score adds much to these poetic skirmishes.) It’s during these scenes that The Kite Runner soars, only to be inevitably brought down to earth by the remainder of the movie.