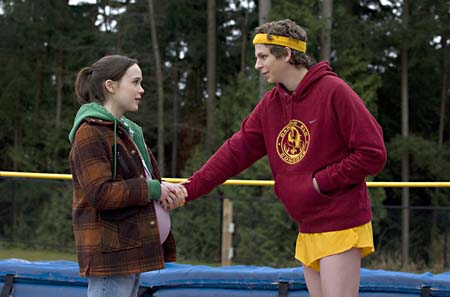 When 16-year-old Juno (Page) pays for her pregnancy test with the stick – pink for positive – still in hand, the cashier wisecracks, “This is one diddle that can’t be undid, home skillet.” That quip, care of screenwriter and freshly minted Hot New Thing Diablo Cody, almost had me audibly groaning: So it’s gonna be like that, is it? Well, yes and no. The quips keep coming, but they slow, stop feeling so aggressively razzmatazz. The language settles down, and Juno settles in to a sharp, winning relationship comedy. There are a lot of relationships to choose from – the strained one with her devoted but aggrieved parents (Simmons and Janney), the newly formed one with the potential adoptive parents Juno finds in the Penny Saver (Bateman and Garner), and the push-and-pull one with best friend and baby daddy Paulie Bleeker (Cera). Paulie’s grand entrance comes by way of slipping on his running shorts and matching wristbands to the tune of the Kinks’ “A Well-Respected Man,” and one can’t help but wonder, at first glance, if he’s some second cousin to the Tenenbaums, the Minnesota division. But, like everything else in the winsome Juno, what plays for laughs has an undeniable ring of real emotion. Paulie may initially seem like a doof, but he’s actually funny and smart and cool without trying (“I try really hard,” he confesses to Juno) and entirely worthy of her affections. Same goes for Juno: Spend enough time with her deadpan and her irony, and you learn how to read between the lines, to the scared, confused, and royally pissed teenager underneath the brazen, Buddha-bellied exterior (a “cautionary whale,” she calls herself). Page (Hard Candy) is marvelous, especially considering what a balancing act the role is between bitchy and twee, and she’s backed by a terrific ensemble cast. I suspect Juno will fall victim to a Little Miss Sunshine-sized backlash – trade in Sunshine's pop art for Juno's loving stencils, and you have a fairly obvious overlap in theme and sensibility. As with Sunshine, I'd call Juno a family film if only it didn't make teen pregnancy look so sporting. Instead, we'll settle for that rare bird, an indie comedy that uplifts – funny and smart, totally trying to be cool and succeeding, and heartfelt to boot.