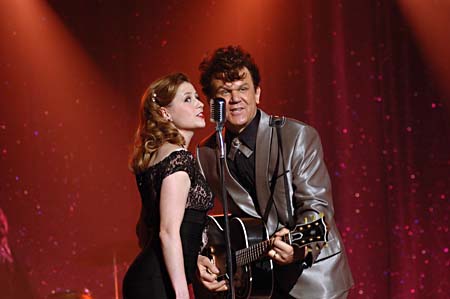 The creative forces behind Walk Hard adhere to one simple rule: If it’s funny once, it’ll be funny 10 times over. And throughout this absurdist spin on musical biopics, the good news is that sometimes they’re right. It is funny again. And again. And again. But conversely, sometimes it isn’t. Taking cues very specifically from Ray and Walk the Line, this film spans 70 years in the life of its hero, the fictional music legend Dewey Cox (Reilly). As a child in rural Alabama, Dewey accidentally slices his older brother in two with a machete. This leads him to take up music, run off with his high school girlfriend (Wiig) and become a star. The story follows a rise-fall-and-rise-again structure as Dewey meets the love of his life (Fischer), develops multiple drug addictions, loses his love, finds her again, and along the way falls prey to every generational music trend in the book. Whether traveling to India with the Beatles, writing protest songs, or hosting a variety show, Dewey manages to enact all the rock & roll clichés. And then some. Simultaneously dumb and enjoyable, the silliness manages at times to be both wonderful and cringe-worthy. In the end, Reilly’s oblivious swagger successfully carries much of the film. So while there were stretches without laughter, I was always seduced back into the fun thanks both to Reilly’s inspired performance and the creative audacity of co-writer/producer Judd Apatow (Superbad) and co-writer/director Kasdan (Orange County). Aside from Reilly, two clear stars emerge: the wardrobe and the music. The costumes (by Debra McGuire) are both oddly authentic and absurd. Similarly, the songs (written by a slew of artists, including Reilly, Apatow, and Kasdan) are genuine, ridiculous, and often very funny. With cameos by everyone from Jack White, Ghostface Killah, Lyle Lovett, and the Temptations, the film is also a veritable who’s who from Apatow’s unofficial comedy troupe. In this case, that includes Starr (Knocked Up) and Rudd (who portrays John Lennon in one of the movie’s funniest scenes – where Schwartzman’s Ringo Starr is truly inspired). And when the penis jokes linger (which is often), it’s apparent that the sharp comic forces behind this epic are simply a couple of juvenile men who think it’s hilarious to show a man’s penis on screen just for the sake of itself. But the embarrassing truth is that, well, sometimes it is.