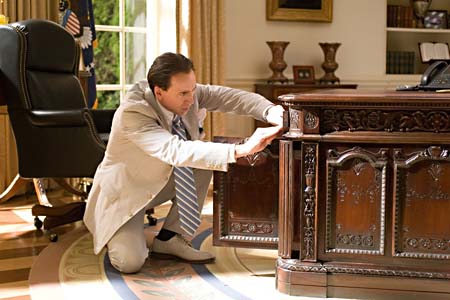 Less twisty than its 2004 predecessor and yet somehow more incoherent, National Treasure: Book of Secrets plays like a duplicate schematic of the first. Treasure hunter Benjamin Franklin Gates (Cage) lights on a noble cause; enlists a plucky cast of fellow hunters, code crackers, and danger enthusiasts (including the unsung Bartha, as Gates’ geekboy Friday); then goes on a globe-hopping quest that amounts to a cinematic series of Russian nesting dolls – crack one clue, and you’re awarded with another, equally inscrutable one. Here, Gates is trying to clear the name of an ancestor accused of masterminding the Lincoln assassination, which is connected to Harris’ Confederate son Mitch Wilkinson’s search for a kind of holy grail – the mythic Native American city of gold, Cebola (a sign of the times: Wilkinson’s baddieness is telegraphed via résumé – he handles a private security firm in the Middle East). In case you were wondering, yes, that’s the same Ed Harris who’s been four times a bridesmaid at the Oscars, mugging alongside other anointed talent as Voight (shambling along as Gates’ daddy, his face in a state of perpetual perplexity), Mirren (as his academic mom), and Cage himself, who’s been slumming so long now, it’s hard to remember a time he was ever taken seriously (and he’s seriously no heir to Indiana Jones – too goofy, too earnest, too sexless). I don’t mean to sound like a sourpuss: There’s certainly a place for this kind of entertainment, and the first outing – same director, same screenwriters (husband-and-wife team Cormac and Marianne Wibberley), same cast – was pleasantly rompy and even sweetly patriotic in its history-buff bent (a retro-ish rejoinder to the bumper-sticker variety à la mode). Book of Secrets, however, isn’t so much a romp as a long trudge through American history factoids and conspiracy-theory gobbledygook. Cool car chase, though.