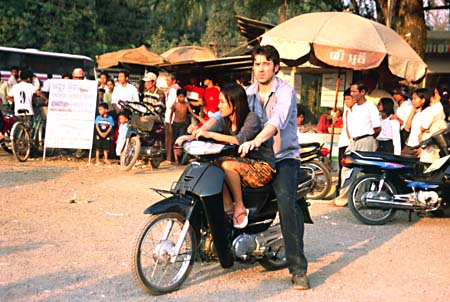 I’ve always had a soft spot in my heart for Livingston. From the first time I saw him in Swingers right through his cult coronation in Office Space and his bout with drunken disaffection in the HBO miniseries Band of Brothers (drunken disaffection always seemed to be the most reasonable response to being shot at by Nazis for four years), I’ve found him unfailingly likable, like Matt Damon or Jerry Maguire or peanut butter & jelly sandwiches. But I never realized he had anything of the artist in him until I saw Holly. In Moshe’s new film, Livingston throws himself with defeated gusto into the role of Patrick, a self-loathing American expatriate in Cambodia stumbling his way from underground poker game to seedy bar in search of the perfect rafter from which to hang himself. Patrick’s life is a void and a vacuum, a manifestation of the complete absence of meaning in the universe, and he knows it. Which is why he looks so exhausted, like he gave up on life years ago, but his body never got the message from his brain to die. Disheveled and unshaven, he’s the very model of a modern lost soul. Until he meets Holly (Nguyen), a 12-year-old Vietnamese girl who was sold into a life of prostitution by her parents. Suddenly, and for reasons unknown even to him, Patrick decides he’s going to save her. Unfortunately, he isn’t really trained to right such an enormous wrong, and the great tragedy and triumph of Holly lies in Livingston’s brilliant portrayal of a man far too accustomed to a life of drunken self-defeat to turn his fortunes around on anything as simple as a stray act of human kindness. Watching him drag himself through streets filled with prostitutes who are barely old enough to ride a bike, I was reminded of the crooked cop in L.A. Confidential, who gets mocked by his captain for indulging a pang of conscience: “Don’t start tryin’ to do the right thing, boy-o,” his boss warns. “You haven’t had the practice.” Unfortunately for Holly (but fortunately for those of us who prefer our protagonists conflicted), Patrick is out of practice, too. He’s no hero; he’s just a man awakening to the realization that, after all these years, he still has some small sense of right and wrong. A lot of good that’ll do him in Phnom Penh. (A representative of the Coalition Against Victims of Human Trafficking will be present at the 7:10pm screening on Friday, Nov. 30, to discuss the realities of the film at a Reel Talk event. The film's director will also be on hand at several unspecified screenings throughout the weekend.)

The Long Dumb Road
The road may be dumb, but at least it's fun