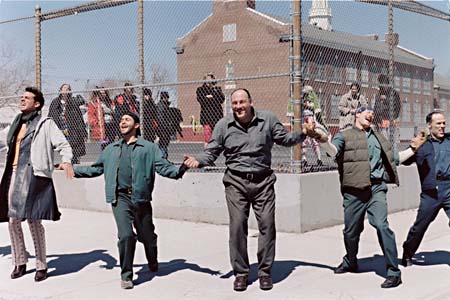 Nick Murder (Gandolfini) has got a hard-boiled name, and his two vices – the title’s romance and cigarettes – have engined more than a few pulp novels, but this poetry-writing construction worker is all bark, no bite. Caught between wife Kitty (Sarandon), who maybe never loved him, and mistress Tula (Winslet), who only wants to jump him, Nick is powerfully conflicted, incapable of ending either relationship. So what’s a guy to do? Why, break out in song and dance! Barring thought bubbles, it’s certainly the most transparent way to announce what’s going on in any character’s head at any given moment – which means Nick, after a vicious dressing-down from his wife, tucks into Engelbert Humperdinck’s version of “A Man Without Love”; newly wronged, Kitty tears her way through Janis Joplin’s “Piece of My Heart” with Eddie Izzard and a church choir singing backup. The first few times this happens, there’s something rather charming in the spectacle, so absurd as to be freeing. This is Turturro's third outing as a writer/director, although he's still better known for his work with the Coen brothers (who executive produce and provide the spiritual DNA), and the long-delayed Romance & Cigarettes is a labor of love so go-for-broke you wonder if somebody gave Turturro six months to live. But he makes a curious decision, which by my count is the film's biggest undoing. His actors don’t lip-sync, but they don’t carry the songs, either; rather, the original song is playing, and the actors sing along, only quieter. If the intention was to bring us closer in to the characters’ emotional states, the effect is quite the opposite – something between the embarrassment of karaoke and the boredom of watching somebody sing along to the radio while idling in traffic. Still, the first few numbers do dazzle, and the first act of the film – which recalls early Hal Hartley with its working-class milieu and stilted yet grandiose language – powers through on spunk, Tom Stern’s lovely lensing, and a commitment to throw everything at the wall to see what sticks – which is how Turturro gets away with setting the story in some nebulous era where doo-wop rubs up against proto-punk and with casting (his sister) Aida Turturro and Parker as Gandolfini’s kids (a mathematical impossibility at, respectively, one and three years his junior). The performances are all swell, especially Gandolfini, with a dirty little mustache; Winslet, all va-va-voom; and Sarandon, who evokes years of neglect in the simple but deadly: "I trimmed your nose hairs, you fuck!" But as the songs pile up and the plot putters along, Romance & Cigarettes wears thin, like a moral for the titular addiction: Sure, there’s the sweet dream of that first drag, but a whole pack’ll do a body bad.