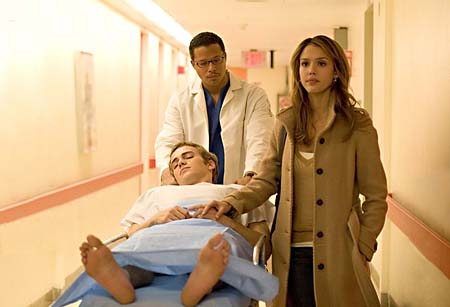 Given the choice between seeing Christensen's Tin Mannish performance as the Emperor's new clothing in Revenge of the Sith or watching him here as he undergoes a heart transplant without actually going all the way under (beware of anesthesiolgists who sound like G-man Kent Mansley from The Iron Giant), I'll take Padmé Amidala in a thong at the Hotel Chevalier, thank you very much. Unintentional non sequiturs abound in Awake, the debut feature from screenwriter Harold, who's cobbled together such an intricate backstory to answer the unasked question of why, exactly, billionaire Wall Streeter Clay Beresford (Christensen) ought to have opted out of his medical insurer's buy-up policy that it's difficult to not stand up and cheer every time there's a cutaway to the gooey, decidedly realistic surgery effects. Having just married Sam Lockwood (Alba) on the sly, Clay receives word that a donor heart has become available the very same night. He has previously had his bum ticker rejuiced by lifesaving surgeon Dr. Jack Harper (Howard, doing some hustle and flow of a different type here). What better way to spend a honeymoon and some time away from his harpy-esque mother (Olin) than in the Grand Guignol of the operating theatre? Once down, however, Clay is far from out, and what he overhears while waiting for the attending physician to arrive is possibly worse than anything yet to come. While this very high-concept story may have wowed ’em in the pitch meeting, it fizzles on screen, with Clay reduced to having out-of-body experiences in order to uncover the skein of troubling coincidences that brought him to this point. I suspect there's a corker of a Columbo episode tucked away behind Christensen's oh-dear-God-i-can-feel-the-scalpel hysterics, but it's shrouded in a pall of such outrageous medical malfeasance – not to mention familial greed, larceny, and the fact that Peter Falk is no longer with us – that you wonder why this rich kid didn't just opt for a black-market heart, à la Turistas, as his mother had suggested. With a running time of 78 minutes, Awake is relatively painless, playing a little like a lesser story from one of EC Comics Shock SuspenStories – or a lot like Joseph Cotten's "Breakdown" episode of Alfred Hitchock Presents – updated for the Fangoria generation. Still, what I wouldn't give for Lt. Columbo to have expedited this film's narcolepsy-inducing exposition. 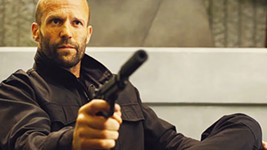