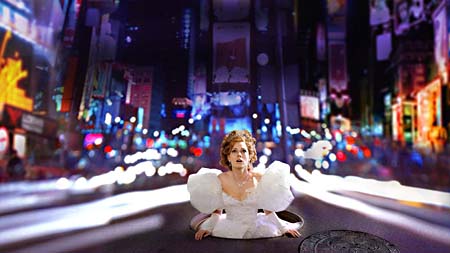 It’s difficult to describe the mixture of romance, dry satire, and musical comedy that is the new Disney film Enchanted. But one thing’s for certain: Adams (Junebug) is its heart and soul. Her ability to play wild-eyed innocence with a biting comic edge never disappoints. And as Giselle, she’s perfectly cast as an amalgam of every fairy-tale maiden. The film begins in an all-too-familiar animated wonderland. Giselle is an innocent forest-dwelling babe who sings with animals and dreams of finding her true love. Enter Prince Edward (Marsden). Singing atop his racing steed, he rescues Giselle from a troll, and the two are ready to live happily ever after. Or not. Edward’s mother, Queen Narissa (Sarandon), is determined to prevent her son from marrying and throws the infatuated young lady into a magical fountain, landing Giselle in the center of Times Square. What’s more, she’s no longer animated. If you can check any need for logic at the door, this is where things get fun. It’s impossible to watch Adams navigate herself through Midtown Manhattan in an enormous hoop skirt and not grin from ear to ear. Operating exclusively through storybook rules, Giselle mistakes little people for the seven dwarves, attempts to enter a billboard with a picture of a palace on it, and insists she’ll be fine as long as she can locate shelter in a nearby meadow or hollow tree. Enter Robert (Dempsey), a hardened divorce attorney and single father. While Robert helps our damsel in distress, she remains convinced that Prince Edward will appear. And he does. Emerging in Times Square with his high boots and puffed shirt, he attacks a city bus and refers to everyone as “peasants.” Meanwhile, Giselle adapts to her environment. When she summons (through song, of course) the local fauna to help her clean, she’s a little taken aback with the appearance of pigeons, cockroaches, and rats. But the ensuing musical sequence is stylish dark comedy as she sweeps with the help of friendly urban pests. Furthermore, there’s a wonderful musical number in Central Park involving a confused Robert and a ridiculously elaborate dance sequence. Marsden (Hairspray) does an excellent job as the dim prince, Dempsey suffices as the cynic with a heart of gold, and Sarandon is coolly over-the-top as the vain queen, but the spotlight belongs to Adams alone. Though writer Bill Kelly’s script takes extreme liberties with plot development and never really leaves you guessing about who will get the girl, the jokes rarely miss, and the result is a refreshingly sardonic fairy tale.