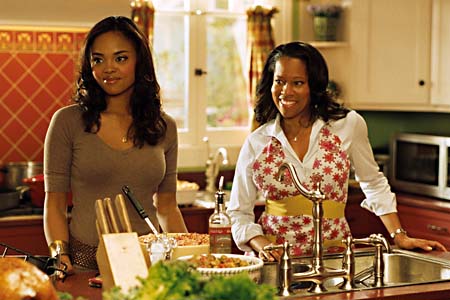 I have to ask: What could possibly explain the presence of two first-rate actors like Lindo and Elba in a movie as bland as This Christmas? After all, this isn’t the old Hollywood studio system we’re talking about, where actors were bound by contractual obligation to take whatever part executives threw at them in fits of dyspepsia. So is it the money that’s motivating them? The fame? The fear of irrelevance? Or are actors as a whole just not interested in the control that other artists see as the lifeblood of creativity? Maybe actors aren’t really artists at all. I don’t know. All I know is that Lindo was West Indian Archie in Malcolm X and Rodney Little in Clockers, and not two years ago Elba was playing Stringer Bell on HBO’s The Wire – the greatest tragic figure in television history – and now they’re starring together in a glorified TV movie about an estranged family reuniting after four years to discover the true meaning of Christmas. Call me crazy, but this really sounds like a job more suited to the talents of Treat Williams and John Stamos. Elba plays the Whitfield family’s prodigal son, Quentin, a jazz saxophonist who decides it would be best to go home for Christmas after a run-in with two impatient bookies over an unpaid debt forces him to leave town with little more than the leather cap on his head. He arrives home to find most of his family members living lives of not-so-quiet desperation. His mother (Devine) is still mourning the fact that her husband left her 20 years ago. His sister Lisa (King) is trapped in a loveless marriage to a cold-hearted philanderer. And his little brother Claude (Short) is not only keeping from his family that he’s married to a white woman they’ve never met; he’s also gone AWOL from the Marines, which wouldn’t be such a big deal except that they’ve got this war going on, and the Marines can be such sticklers about that sort of thing. Add to the mix the puckish baby of the family, named Baby (R&B teen idol Brown, who, by the way, just released his new album last week on Zomba Records, which is a subsidiary of Sony, which is releasing This Christmas, which is just a happy coincidence), a couple of extended all-family dance sequences in the living room, and a soundtrack composed of jazzed-up Christmas carols that will make you feel like you’re trapped in a shopping mall, and you’ve got the perfect formula for holiday cheer: It’s redemption through sentimentality, salvation through schmaltz. 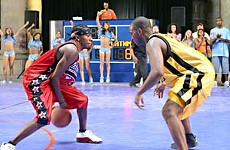 Crossover
The story of the friendship and contrasting paths to success of two natural ballplayers, both of whom appear to be too old to be playing teens, Crossover tries hard but never makes the leap.