It seems at first like an odd pairing: the Coen brothers, they of the dark-humored film genre conflations, and Cormac McCarthy, the modern laureate of the Southern Gothic novel. Yet the adaptation by Joel and Ethan Coen (both co-credited as writer and director) of McCarthy's as-if-written-for-the-screen No Country for Old Men becomes a marvelous meld of narrative faithfulness and pre-established sensibilities. The film is essentially a crime drama, although also something of a chase film. It holds up against the Coens' earlier genre masterpieces like Miller's Crossing and Fargo and makes recent genre misfires like Intolerable Cruelty and The Ladykillers more forgivable. The No Country for Old Men storyline is as old as the template for the Coens' first film, Blood Simple: Follow the money. At least three characters here are chasing a satchel filled with $2 million. The first is LLewelyn Moss (Brolin), who accidentally discovers the money while out hunting in the parched Texas scrubland near the Mexico border. He has stumbled into a drug transfer gone monumentally bloody and decides then and there that his ship has come in but is too foolish to see that it's only a desert mirage. Almost immediately on his trail is Anton Chigurh (Bardem), a renegade "collector" who, with his strange Buster Brown haircut, singularly odd and memorable weapon of choice, dispassionate fatalism that allows him to kill anything in his path, and perverse hint of the executioner's joy at being the ultimate arbiter between life and death, is a character who immediately leaps to the forefront of indelible American monsters. He is a new kind of entity in the eyes of Sheriff Bell (Jones), the lifelong Texas lawman born into a family of lawmen. Bell quickly deduces that it is Moss who made off with the money, and he sets out to find him, not so much for the propriety of recovering the money but to protect one of the citizens of his county from Chigurh's remorseless carnage. Chigurh represents an evil like nothing Bell has ever seen before, and that puts a fear in him. "I don't want to meet something I don't understand," says the sheriff in one of his voiceover monologues that comes straight from the book. The utter breakdown of the social covenant that Bell senses in Chigurh (whose name is as unplaceable as the character is unknowable) makes Bell (and the viewers) feel vulnerable and leads to an abrupt denouement that may be the movie's only false note. Nevertheless, as it unfolds, the cat-and-mouse chase is a sheer delight to watch as the Coens zero in on tiny images (like the tracks in the dust of a ventilator duct or the sweat on a cold bottle of milk) and make use of the absence of things like footsteps or any music score to speak of to make viewers hang on the details of every scene. The performances are captivating, too, from Jones' late-career casting as yet another lawman to Bardem's implacable evil to Brolin's emergence from the TV shadows into a cinematic leading man to the tasty supporting performances of Macdonald, Dillahunt, Corbin, Harper, and others. The American West may no longer be a country for old men, but this movie shows that it is not a survivable atmosphere for young ones, either. The Ending Was Only the Beginning
Harry Knowles and others dissect No Country for Old Men's ending. 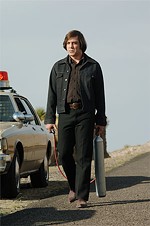