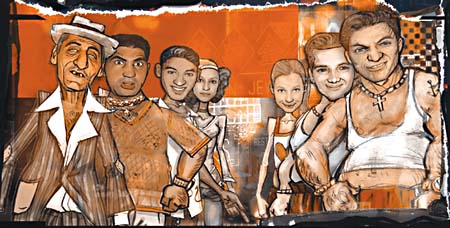 There's so much going on in this animated Hungarian feature that if you don't have attention-deficit-hyperactivity disorder going in, you may well develop it by the time you exit the theatre, and I mean that as a compliment. Hungary's first feature-length animated film since the collapse of the Soviet Union is dense with snarky satirical references that run the gamut from current geopolitical figures (Osama bin Laden, Vladimir Putin, and George W. Bush) to Hungary's own prime minister and assorted other key regional politicos, all of whom are portrayed as greed-emboldened, petroleum-crazed maniacs. But at its heart – which is equal parts South Park and Magyar-inflected hip-hop – The District! is a smart, urban riff on Romeo and Juliet. The hyperactive plot follows two Budapest street gangs (their turf is the titular district) and their quest for "money, peace, and pussy." One group consists of reactionary native Hungarian youth led by the street-wise Ricsi (Junior). The other group is Gypsy, the leader of whom is Julika (Roatis), Ricsi's erstwhile love interest. The District! was made the same year Hungary entered the EU, and cash (or the lack thereof and how best to rectify that situation) is the story's thumping, guerrilla crux. It's almost impossible to summarize from hereon in; suffice to say such subjects as time travel, the capture and burial of herds of woolly mammoths, and the subsequent appearance of a subterranean lake of crude oil beneath Budapest – plus the sudden appearance of the late Pope John Paul II – make this one of the most audacious and original animated features yet to come out of the post-Soviet era. The District! was a surprise hit at Fantastic Fest 2006 (where it screened under the title of Nyócker!). Although its quasi-East-meets-West Side Story and freaky mélange of 3-D, CGI-rendered animation and rough-hewn cut ’n’ paste style – not to mention the hooker chorus lines and rapid-fire, blink-and-you'll-miss-'em subtitled political satirics – are initially jarring, it really is unlike anything you've ever seen. Much has changed in Eastern Europe in the three years since The District! was made, but, if anything, its attention to the exploitation of newly oil-rich (and previously ignored) countries by superpowers both old and older is more intensely pertinent than ever. And, honestly, where else are you likely to see a teenager's bedroom wall sporting posters of both Rocky and Russian music duo Tatu while an urbanized version of the Bard's balcony scene unfolds underneath?