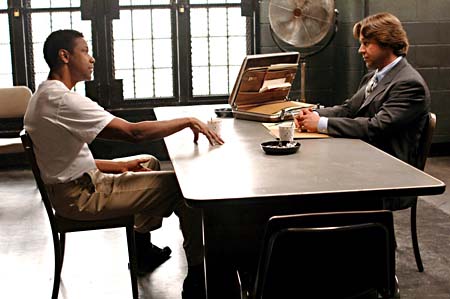 Based on Mark Jacobson's New York magazine article, American Gangster does a crackerjack job at nailing the look and feel of New York City's bad old days, when mayors Lindsay and Beame (mis)ruled over the Manhattan canyons and Bronx tenements aided and abetted by a police department riddled with more internal corruption and outer rot than a smack-head's corpse. Every day was a dog-day afternoon, and Serpicos were in short supply. Hell may have come to Harlem and dressed to the nines – in the form of the much-admired, longtime crime boss Bumpy Johnson, here played to the essential hilt by a terrific Williams III – but at the height of the Vietnam War, it was the late Johnson's driver and confidante, Frank Lucas (a sizzling, ferocious Washington), who figured out a whole new angle. He took over Harlem's heroin trade, which was exploding thanks to the many GIs who returned home with a habit picked up in Southeast Asia, and undercut the mob by first brokering a deal with the Thai manufacturers and then shipping the 100%-pure skag back stateside in the coffins of American servicemen. Conservatively attired, Lucas flew, with murderous aplomb, under the radar of those cops not already on the take. He moved nearly half his family up from the Carolinas to serve as his crew and bought his mother (the captivating Dee) a mansion fit for a kingpin's mom. Only when a sudden fit of pimpy ostentation hit during the Ali-Frazier boot at the Garden (his wife bought him an ermine coat-and-hat ensemble) did he come to the attention of Jersey cop Richie Roberts (Crowe, sporting Dustin Hoffman's Seventies-era hair and Star of David). Roberts is uniformly loathed and scorned by the NYPD's dirty cops (led by a great Brolin), who view him as a stooge and a dupe for not going with the bribery flow. (The film's running gag is that Roberts was clean enough to actually turn in a million bucks in unmarked bills that he found in a suspect's car.) Like Eliot Ness before him, Roberts is tagged by the feds to create his own Untouchables and weed out the source of the increasingly fatal Blue Magic distribution network. Crowe has rarely been better, and the same goes for director Scott, who parallels and then dovetails Lucas' and Roberts' stories with sublime, gritty precision, working up to a magnificent Godfather: Part III-style crosscutting sequence that electrifies an already explosive tale. Like Joe Friday said, the story is true, but only a few names have been changed, because in this NYC, hardly anybody was innocent.