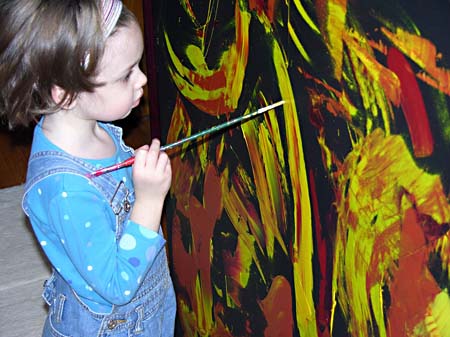 My Kid Could Paint That

A truly perplexing documentary, My Kid Could Paint That begins as a fascinating cultural investigation, then events occur during the shooting of the film which cause filmmaker Bar-Lev to shift his focus and consequently render his finished product an ultimately creepy and exploitative document. The subject of his study is Marla Olmstead, a child who, at the age of 4, was painting abstract canvases, allegedly by herself, that were commanding top-dollar purses and gallery exhibitions. Intrigued by the possibilities of making a documentary about our culture's fascination with child prodigies and the ongoing debate over the standards by which we gauge modern (and especially abstract) art, Bar-Lev entered the lives of the Olmstead family and spent nearly a year filming them. Parents Mark and Laura, Marla and brother Zane allowed Bar-Lev incredibly free access to their lives and home in Binghampton, N.Y. Marla and her paintings had already been written about locally and profiled in The New York Times, whose chief art critic Michael Kimmelman is recorded speaking quite eloquently of the dilemmas inherent in judging abstract expressionist art in which there is no good and bad, no right and wrong. The local reporter, Elizabeth Cohen, who wrote the first story about Marla's accomplishments also eloquently warns Bar-Lev of the potential of all the media attention to have a distorting effect on the child and her family. All this provides rich material that fully engages the viewer in the validity of these debates and provides much food for thought, especially as we witness Mark's ready acclimation to the instant fame and Laura's reticence and concern for Marla's long-term welfare. Then, shortly into the filming process, 60 Minutes does a story on Marla which suggests that Mark, an amateur painter, has been "helping" his daughter, a claim seemingly validated by the news team's inability to ever capture Marla actually completing an entire canvas. At this point, the family dynamics become inflamed by the charges and Mark and Laura turn to Bar-Lev and his documentary as a way to clear their names. Even though the filmmaker now has doubts regarding the authenticity of Marla's paintings, he expresses these to others but not to the Olmsteads, who continue to give him their unbridled trust and self-exposure. It is here that Bar-Lev places his desire to complete his film over the needs of the family and this innocent child celebrity. Bar-Lev exploits Marla as much as, if not more than, any other player in his movie. All the film's earlier questions about postmodern art and the origins of creativity fall by the wayside in light of the filmmaker's naked exposure of his motives and false pretenses. Frustratingly, he never reaches any conclusion about whether Marla is indeed the sole author of her work. My conclusion is that exploitation of a child for the sake of one's career is a shameful act. 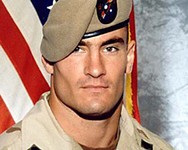 The Tillman Story
Documentary about the high-level cover-up of the circumstances surrounding the death of NFL star turned Army Ranger Pat Tillman.

My Kid Could Paint That, Amir Bar-Lev