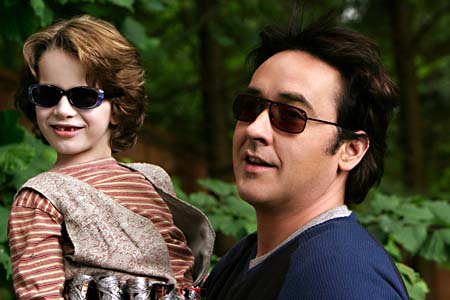 Only in Hollywood can a movie about alien children be boring. Even if the kid isn’t really an alien (no spoilers), there’s still opportunity galore for the wild and the weird. In the hands of director Meyjes, a movie about a boy convinced he’s from Mars becomes Little Orphan Annie. Adapted (by screenwriters Seth Bass and Jonathan Tolins) from the semi-autobiographical book by famed sci-fi writer David Gerrold, the film follows David (Cusack), a widower and successful science fiction author who decides to adopt a 6-year-old boy (Coleman). The child is Dennis a recluse whose abuse and abandonment issues have left him convinced he’s from Mars. This includes quaint little idiosyncrasies such as wearing a weight belt to fight Earth’s gravity and renaming the family dog Flomar (it’s Martian for “warm furry friend”). Once David brings Dennis home, the movie becomes a quirky relationship dramedy between fledgling father and son. And the two make a decent pairing. Coleman’s solid understated performance contrasts well with Cusack’s neurotic first-time dad. While attempts to play baseball, attend school, and generally be “normal” all lead to various contrived hijinks, Cusack’s genuine talent evokes a few smiles and maybe even a chuckle. But the lamely predictable script combined with the complete absence of any cinematic daring results in about 10 heavy sighs for every quiet laugh. Joan Cusack (who, like her brother, has great comedic timing) appears as (natch) David’s sister. And love blossoms with David’s deceased wife’s best friend (Peet). It’s all just so … perfect. That is, of course, when the boredom begins. There are absolutely no surprises as the film disintegrates into its own cutesy display. Platt shows up as David’s literary agent and Huston as his demanding publisher, but neither presents any genuine conflict. Schiff (The West Wing) wanders through as a by-the-book caseworker, pushing the film to its inevitable climax: Will the state break apart this happy little family? The answer? Take a wild guess. Unfortunately, the worst part isn’t the predictability. I suppose I can roll with unsurprising. No, the worst part is that the caseworker conflict isn’t really the climax. Oh, no. That’s the fake out. You have to sit through another 20 or so minutes wondering, “Shouldn’t I be in the parking lot right now smoking a cigarette and bitching about how Hollywood just doesn’t get it?” Nope, you’re sitting through the end of the film.