Some call it “mumblecore” – this (small, not terribly insistent) groundswell of indie talkers about rootless postgraduates who slump on ratty futons and improvise self-consciously in natural lighting – and it is not for everyone. The budget is low, the timing is slow, the conflicts are internal, and nothing explodes. People take showers, check their e-mail, play the guitar, eat cereal, and say goodbye to one another at roughly the same pace as we do in our actual, unedited lives. This is, of course, partly the point: rendering the uncomfortable pauses, the stilted conversations, the hesitations, and the small and silently cumulative moments of actual, unedited lives within a loose narrative framework. The film has no script; it goes from moment to moment unhurriedly, following production intern Hannah (Gerwig) through her days and nights – Nerf-ball games at work, waiting for the bus, and a series of relationships fueled by “chronic dissatisfaction.” First is Mike (The Puffy Chair’s Duplass), an affable goofball rejected in a frank, scrutinizing breakup scene; at the office are likely prospects Paul (Bujalski, mumblecore titan of Mutual Appreciation and Funny Ha Ha) and Matt (Osborne, whom I know best from his SpongeBob scripts). The entanglements are awkward, fraught with romantic ambivalence and unerotic sex – which is to say that they are terribly authentic depictions of the wide-open and too often blank spaces of your 20s. Swanberg films his actors with the naturalistic matter-of-factness typical of the trend, with long takes in the cramped interiors of entry-level life, and it is at times uncomfortably intimate (if ultimately less squirmy than last year’s LOL). All that said, curious viewers seeking an entrée into mumblecore (assuming we persist in calling it that) will likely find none better, least of all because its practitioners are apparently all assembled here. Though he’s probably more of a pessimist than Bujalski, Swanberg can be playful behind the camera – he has a taste for Godardian jump cuts – and his sense of color is crisp. Gerwig, his millennial Jean Seberg, is no pixie; her captivating ordinariness helps hold the movie together. SXSW Film Presents 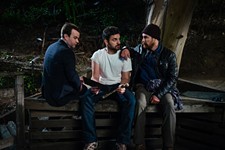