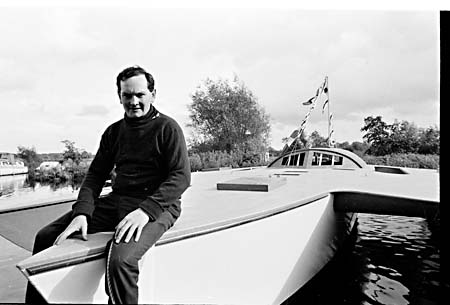 Imagine a 12-story building towering over a small truck. Now imagine the truck is your boat and the building is a wave. That’s the metaphor one mariner uses to articulate sailing alone through the Roaring Forties (so named for its latitude), the dangerous waters stretching through the Southern Hemisphere past Cape Horn. The concept is both terrifying to consider and courageous to endure, especially alone. The documentary Deep Water tells the white-knuckled true story of the first single-handed around-the-world yacht competition. In the summer of 1968, The Sunday Times of London launched the competition and nine aspiring history-makers signed up. Among them was Donald Crowhurst, whose story drives the focus of the film. A novice sailor, Crowhurst was a dark horse amongst a lineup of experts. An engineer and a dreamer, this ruddy-cheeked Englishman was a “weekend sailor” who entered the competition in an attempt to salvage his failing business by achieving something great. Leaving his wife and four children behind, he designed his own boat, risked both his life and financial ruin, and launched into a fierce adventure. I won’t ruin it for you, but the journey that follows is wild and powerfully compelling, and it's no coincidence that one of the film's producers, John Smithson, also produced Touching the Void. Mixing extensive archival footage (including Crowhurst’s personal films and audio tapes from the journey) with interviews from family members, press, and sailors, the film paints the portrait of a desperate man brought to the limits of human endurance. It’s hard to imagine a time when the sea bore a sense of adventure close to outer space. (With today’s satellites and global positioning systems, a boat’s location can be determined within a few feet. Not so back in the day.) A year shy of NASA’s first moon landing, humanity still felt the need to tackle the sea. Through emotional interviews, often astounding archival footage, and delicate narration (by Swinton of Michael Clayton), the film evokes a visceral understanding of solitude at sea. With only Morse code and infrequent radio signals as communication, the men spent months alone in the vast expanse of water. The other competitors include the expert Robin Knox-Johnston and the enigmatically fascinating Françoise Moitessier, a philosopher more comfortable alone at sea than meeting the roaring crowds who await back home. 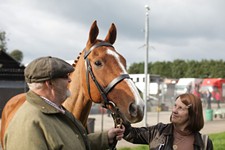