Randy and the Mob

Regional comedy, like regional barbecue, isn't always pretty, but when it's done right it can blow past that metaphorical Macon County Line and generate sympathetic guffaws pretty much anywhere. The phrase "Southern comedy" need not be a punch line in and of itself, but you'd hardly glean that from this big-hearted but surprisingly dopey offering from Atlantan McKinnon (who nailed an Oscar for his 2002 short, "The Accountant," but is probably best known as Deadwood's the Rev. Smith). I say surprising because McKinnon's previous directorial gig was the underrated gem Chrystal, a film so seethingly genuine in its steamy Southern (dis-)grace and (in-)hospitality that DVD renters are advised to check for spontaneous kudzu-creep when they eject the disc from their players. Randy and the Mob (which screened at the Austin Film Festival this past week) warrants no such cautions, sadly. Playing both the cash-strapped, Georgian family man of the title and his gay twin brother Cecil, McKinnon's serio-comic take on the suburban Southern gentleman in disrepair falls just shy of becoming a Jim Varney vehicle. It's not that McKinnon's film features a bad slapstick routine that ends with the increasingly desperate Randy covered in baby shit. Nor is it the fact that the bizarre mob fixer sent to "help" extricate Randy from his financial woes is, as played Goggins, from some sort of alternate universe – a meta-riff on Billy Bob Thornton's Sling Blade character had he been played by Bill Paxton (in a Speedo, no less). It's just that the comedy and the drama never quite – no pun intended – crystalize into anything remotely affecting, with the end result feeling more like some extended Southern in-joke than an honest movie. McKinnon has proven he's a talent to be reckoned with, both in front of and behind the camera, when he's working with the right material, but this isn't it. Go rent Chrystal (but mind the kudzu). 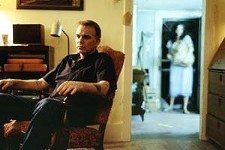 Chrystal
Billy Bob Thornton plays an Arkansas husband who attempts to redeem himself after critically injuring his wife and killing their son in a car accident four years earlier.