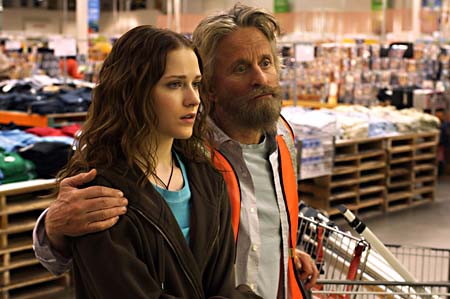 The feature debut from writer/director Cahill, which premiered at this year’s Sundance Film Festival, pulls off some surprising feats of heartfelt storytelling. Douglas plays Charlie, the absent father to Wood’s teenage Miranda. While Charlie spends two years in a mental asylum, Miranda cleverly deceives the governing bodies (child welfare, foster care, etc.) into thinking she’s being taken care of, when in actuality, she leaves school and purchases a car before securing a driver’s license, all the while supporting herself through a job at McDonald’s. It’s a life defined by premature adulthood, a 15-year-old swimming hard in a sea of responsibility. And then there’s Charlie. Bug-eyed and bearded, Charlie emerges from the asylum and returns to his daughter’s life with an adventurous resolve. Marveling at visions and questioning whether it’s Christmas in March, Charlie’s grasp on reality seems tenuous at best. But what he lacks in reasoning, he compensates for in determination. Convinced that a 17th century treasure lays buried somewhere in the Southern Californian corporate sprawl, he recruits his daughter into a quest of modern prospecting. Hiking through highways, past Applebees and Petcos, Charlie drags the begrudging Miranda on his expeditions. The story centers on this quest as clues mount and Miranda attempts to embrace her father’s dreams. It’s a nice relationship and for the most part; Wood’s dry teenage angst plays well against Douglas’ wild eyes and ridiculous ideas. Much of the film relies on the landscape (photographed in beautiful pastels by cinematographer Jim Whitaker). This image is best represented by the family home: a peeling Victorian surrounded by rows of identical housing developments. Cahill’s observations about modern life in its indistinguishable corporate sprawl seem obvious, and they are, but his fresh emotion brings a spark that is at once self aware and innocent. The plot has a few small surprises with moments of surreal revelation that make apparent writer-director Alexander Payne’s (Sideways, About Schmidt) involvement as producer for this untried filmmaker. The story is simple, sometimes to a fault, and ultimately Cahill doesn’t quite pull off all of the majesty that he attempts. But, I’m excited to see what he’ll come up with next. 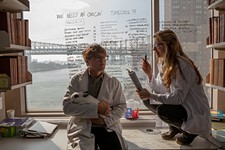 I Origins
The director of 2011's Another Earth is back with a another appealing yet fuzzy story about rift between empiricism and spiritualism. 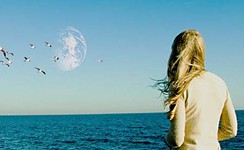 Another Earth
Shaky science fiction shacks up with a corny redemption tale in this Sundance Film Festival double award-winner.