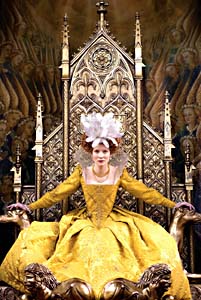 Nothing sets a girl's heart racing more than having her dreamboat name a new world after her. So when Sir Walter Raleigh returns from an expedition and entrances the Virgin Queen with stories of his discoveries and how he named Virginia for her, even the most uncommon of girls – a middle-aged queen who, decades ago, vouchsafed her celibacy for the good of her people – is likely to be caught in a bit of a swoon. Such is the case in Kapur's sequel to his 1998 film, Elizabeth, which also starred Blanchett in her breakthrough role as England's monarch Elizabeth I. Whereas Kapur's original film concluded with Elizabeth's vow of celibacy and focused on her transformation from girl to monarch, his sequel picks up in 1585, the 27th year of her reign. The tone of this film is melodramatic, hypothesizing the unconsummated love between Elizabeth (Blanchett) and Raleigh (Owen). Adding salt to the wound, Elizabeth tosses her comely lady-in-waiting Bess Throckmorton (Cornish) at Raleigh, whose attention becomes so diverted that he ironically falls in love with Bess. Ooh – catfight in the court … almost. Blanchett, however, is such an amazing actor that she renders even this foolishness watchable. There is also military intrigue as King Philip II of Spain (Mollá) launches his armada at England in order to save the country from the Protestantism of Henry VIII's daughter and make Europe again safe for Catholicism. Dramatic battle sequences follow. There's also the sidebar plot involving Elizabeth's doomed-to-be-headless half-sister Mary (Morton), although there's either too little or too much of Mary's predicament presented here to make much of an impression. And, of course, there is the standard-issue court intrigue as Catholic assassins, henchmen of Philip and Mary, plot to obliterate the Anglican menace. Kapur's shots are beautifully composed, and the costumes and decor add to the film's delicious production design. Despite good performances all around, particularly the ever-brilliant Blanchett, Elizabeth: The Golden Age is a gilded ornament, speculative and uninterested in much besides this queen's matters of heart. 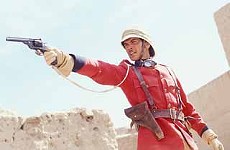 The Four Feathers
You can't help but root for Heath Ledger as he meanders between the dunes and the Sudanese wastes, sunburned and blistered and despised by the ...