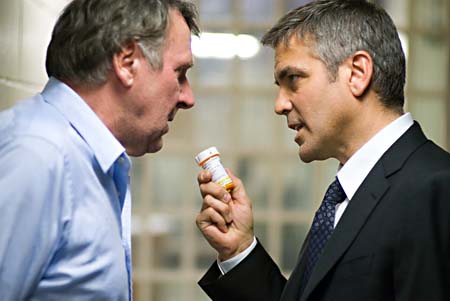 “The first thing we do, let’s kill all the lawyers.” That oft-quoted line from one of Shakespeare’s plays may reverberate in your mind while watching the meticulous legal thriller Michael Clayton. To be clear, this smart and thoroughly entertaining film doesn’t engage in attorney-bashing as much as it thoughtfully asks the question of where a lawyer’s ethical responsibility to zealously represent a client ends and the societal interest in achieving justice begins. In Michael Clayton the truth is a slippery thing, particularly when billions of dollars are at stake in a class-action lawsuit in which an agrochemical corporate giant is accused of manufacturing a toxic product resulting in hundreds of deaths. When the brilliant lead attorney for the corporate defendant suffers a public meltdown during a deposition, his high-powered law firm brings in the titular character to “fix” the situation. Michael Clayton (Clooney) may have a degree in jurisprudence, but he doesn’t practice law in the traditional sense. Rather, he’s the firm’s highly paid janitor, a man who cleans up messes before they become something unmanageable. The irony is that Clayton is unable to clean up his own mess of a life: He is divorced, struggling with a gambling addiction, and financially strapped after the failure of a business venture in which he invested his life’s savings. The plot kicks into high gear when Clayton discovers why his colleague has gone off the deep end. It’s this knowledge that challenges his moral conscience and, ultimately, places his life in danger. Director/screenwriter Gilroy has crafted a streamlined screenplay that is both sleek and provocative, with few subplots and loose ends to distract you from the narrative’s essence. Occasionally, the pieces fit together more perfectly than real life would allow, and the ending of the film, while extremely gratifying, is more Hollywood than a film purist might like. But these are minor criticisms when considering that Michael Clayton is a rare thing these days – an intelligent and captivating thriller that doesn’t devour itself with ridiculous plot twists and a dumbfounding ending. The acting is superb across the board, with Wilkinson fascinating to watch as the manic-depressive attorney seemingly set free by the smoking gun he uncovers in the course of the lawsuit. He is the legal version of the crazed newscaster Howard Beale in Network, teetering on the edge of madness while spouting pronouncements about the state of his profession with a strange clarity. But Clooney’s performance as the film’s central character is what you’ll remember most here. It is a triumph of acting and star quality. Clooney’s world-weary eyes convey the fact that, for all his character’s confidence and abilities, Michael Clayton is a man who is extremely dissatisfied, and perhaps disgusted, with the course his life has taken, including the way he makes a living. Like Spencer Tracy, Gene Hackman, and others who have made acting on the big screen seem so easy while taking us on a journey that is far from simple, Clooney is the real thing. 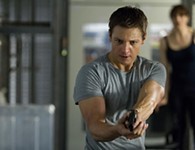 Duplicity
Julia Roberts and Clive Owen star in this new thriller about schemers and double-dealers.