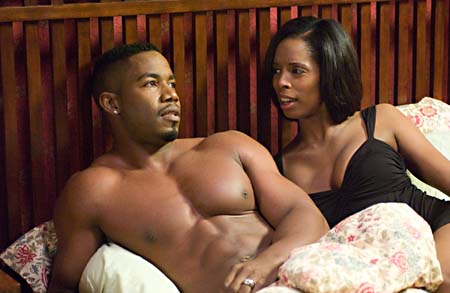 Tyler Perry's Why Did I Get Married?

Maybe everyone just knows that Janet Jackson has cheek implants. But I didn’t. At least I didn’t assume as much. Not until I saw Perry’s latest opus in which those cheeks take on absurdist proportions (think Jack Nicholson as the Joker). But, I guess if you can buy Jackson as both a doctor and a bestselling author (not of the diet-book variety), then maybe you can buy her cheeks as authentic. In this latest effort, Perry characteristically presents himself in quadruple-threat-style as writer, director, producer, and actor. While his last film (Tyler Perry's Daddy’s Little Girls) focused on one couple, this one branches out into four. Jackson plays a psychologist who vacations every winter with a group of close friends, all married couples and all dealing with much drama. As the couples vacation together, emotions run amok, dirt gets thrown, and purportedly, we all learn a little bit more about the true meaning of marriage. But frankly, I think I learned more about the true meaning of contrived melodrama. Take one abusive relationship, add some infidelity, a dead child, a mountain of guilt, several fur coats, a cat fight or two, and you’ve got yourself one hell of a melodramatic throwdown. And Perry follows these rules to the letter. In fact, there’s such an overriding sense of soap opera that I kept expecting a commercial break. The bad guys say things like, “If you haven’t cheated on your wife, you’re gay.” While the good guys say, “I love you more than every word ever printed.” And everyone’s dealing with some maddeningly intense relationship drama. But, of course, everyone winds up forgiven or better off without. Spouses miraculously turn over new leaves and life gets better. But, like a bad comedy with one or two laughs, a bad Perry movie can be counted on for one or two tears. And when a weepy Jackson proclaims, “The greatest achievement for anyone is to love God, yourself, and others,” I couldn’t help but mist up a little and think, you go girl, you and those cheeks of yours.