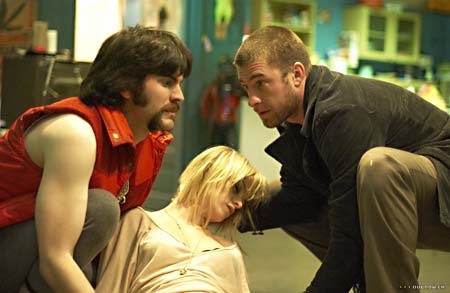 After nearly nine months on the festival circuit (including last week's Fantastic Fest), this baby is ready for its theatrical launch (with an exclusive opening here in Austin this week). Weirdsville accomplishes something that is rare indeed for Canadian-made comedies: It's actually funny. Most of the story takes place over the course of one night in which two junkies (Speedman, Bentley) must come up with the money owed to their dealer or face the consequences. Best pals Royce (Bentley) and Dexter (Speedman) are a couple of hapless, aimless drug Hoovers (although Dex is trying to quit), who live in the frost-covered town of Weedsville along with their friend Mattie (Manning, from Hustle & Flow), a part-time hooker and full-time junkie. When Mattie seemingly overdoses, Royce and Dex decide to hide the corpse and bury it in the bowels of the drive-in where Royce used to work. (You know it's a Canadian comedy when the two men carry her body out to the car in a hockey bag.) Their plans are interrupted by a group of amateur satanists, who have also selected the drive-in for their nefarious ceremony. The entire film becomes one endless shaggy-dog story, as the junkies escape the drive-in and go on to break in to a rich man's house and commit a theft in order to snag the money they need to save their hides, all while the satanists remain in pursuit despite a convoy of medieval re-enactors who are chasing them. Weirdsville calls to mind other stoner capers like The Big Lebowski, Pulp Fiction, and Trainspotting in which one goofy event leads to the next; however, the film that Weirdsville reminds me of even more is the cult gem Safe Men. Perhaps that's because, to some extent, Bentley gives a performance that calls to mind Steve Zahn, who co-stars with Sam Rockwell in that similarly offbeat comedy about a couple of bad musicians who, by accident, become even worse safecrackers. Bentley and Speedman share a brilliant chemistry, bouncing off each other with the familiarity of longtime friends. Speedman, in particular, is so committed to the role of Dexter that there appears to be no separation between the character and the actor. The dedication of these two actors helps carry the film through a somewhat-shaggier-than-necessary second act, in which it becomes almost impossible to sustain the complete go-with-the-flow randomness of the plot. Director Moyle (Pump Up the Volume, Empire Records) keeps a sure hand on the proceedings as the film blends comic events with surreal visions and adrenaline-fueled action (and editing). Weirdsville threatens to veer off-track in a couple of places, but the strength of the performances and direction always brings everything back into line. 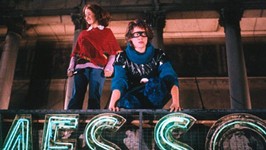