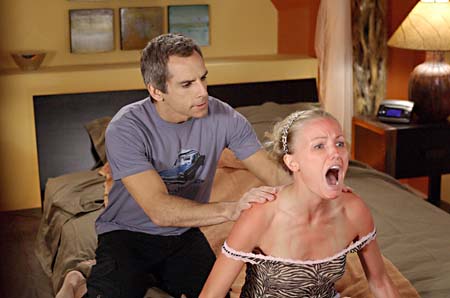 I will put this to you and dare you to deny it upon pain of death: A man has not fully lived, comedically speaking, until his ears and eyes have been blessed with the experience of octogenarian Jerry Stiller as Doc, the crustily libidinous father of Ben Stiller's 40-year-old nonvirgin bachelor, Eddie Cantrow (aka the Heartbreak Kid), who poses that most paramount of posers, "Been crushin' any pussy lately?" Eddie's answer in the negative clearly chaps his pop's shmekl; when next we spy Doc, he's schvitzin' his way to the promised land via a Vegas hot tub overflowing with both booze and an ultravixenesque vision of feminine pulchritude that'd render even Russ Meyer momentarily insensate. Clearly, Doc is a crusher of the old school, and, someday, some smart director is going to make his story, but this is not that. This is, instead, a smart and winning remake of a 1972 Neil Simon-penned Elaine May film. Here, at the wedding of his former fiancée, Eddie meets and falls madly in love with Lila (Akerman), an appealingly giddy blonde whose witty banter and overt carnality bode very well indeed for his near-future "crushin'" prospects. Before long, they're hitched and honeymooning in Cabo, where, to his dawning dismay, Eddie discovers why, in the long run, Match.com may not be such a bad idea after all. Lila sings along, boisterously and well, with every single song that comes on the radio, her marathon sex drive could have qualified her for a spot in the 1938 Munich Olympics (but leaves him a quivering wreck), and suddenly what seemed like a match made in heaven becomes, in the space of days, a hellish mistake. And so, when Lila gets laid up in the honeymoon suite with a severe case of sunburn, Eddie wanders down to the beach and offhandedly makes the acquaintance of another seaside guest, the sweetly self-effacing Miranda (Monaghan), there with her extended "redneck" family. Eddie recognizes a kindred spirit, of sorts, and suddenly it's love at first Jose Cuervo. But what to do about the sun-blown sex bomb upstairs? The Farrelly brothers have always leavened their gross-out strain of humor with a genuine affection for humanity's romantic foibles, and they restrain their more prurient inclinations even further here. This is a Farrelly film for adults, if not the entire family, and it's a charmer, honest both to the nature of the loves we choose in haste and the fear that makes us so hasty so often. The younger Stiller varies his hapless Jew schtick just enough to make Eddie a wholly believable (and ultimately sympathetic, if inadvertent) heartbreaker, and the entire production is marked by stellar comic performances. If it lacks some of the fiercely anarchic tang of early Farrelly outings (such as the criminally underrated Kingpin), that's not such a bad thing. They've been crushing pussies, so to speak, for long enough, frankly, and it's a pleasure to have them breaking hearts for once.