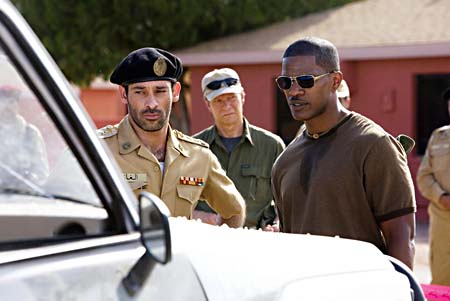 At first glance, The Kingdom looks like it's another in this season's string of politically charged movies, but the thriller swiftly abandons the complications of geopolitics for the snappy showmanship and fuzzy logic of something resembling CSI: Riyadh. The Saudi Arabia-set story opens with a brief history of the country and its 20th century interactions with the United States. However, in an instant, a series of devastating bombs goes off within the American oil-workers' compound in Riyadh, and FBI man Ronald Fleury (Foxx) is called away from his son's school to report for duty. Fleury's staff is rabid to fly to Riyadh to investigate the crime and find the murderers, but they are hampered by squirmy politicians and bureaucrats. But the resourceful Fleury devises a way into the country, and like the caravan of sport utility vehicles that whisks him and his team from the airstrip at 150 mph, The Kingdom is off and running at a rapid clip. Along with him are FBI experts in explosives (Cooper), intelligence (Bateman), and forensics (Garner), though one has to wonder about the basic efficacy of an FBI that would send a woman to perform autopsies in a country whose religion doesn't allow women to touch the male body. None of the characters is very well-defined, and Cooper, with his weather-beaten face and mien, is the only member of the team who carries any authenticity. Garner and Bateman (who, coincidentally, appear as a married couple in the upcoming film Juno) are serviceable but interchangeable, while Foxx, despite being good, has an undisguisable comic twinkle that becomes a bit problematic once he starts blowing up lots of people and things. The revelation is Barhom as Saudi Col. Al Ghazi, who becomes the American team's liaison. The screenplay by Matthew Michael Carnahan draws simplistic parallels between Al-Ghazi and Fleury, who are both dads and family men. Berg stages some tremendous action sequences, though it is hard not to come to the ultimate conclusion that these scenes are the only point of the movie. Largely a crime-scene whodunit, The Kingdom culminates in to-the-death shoot-outs in which people wearing kaffiyehs die by the dozens while the little band of Americans eventually flies safely into the sunset. If the jingoism that permeates the latter half of The Kingdom does not sufficiently sour the experience of watching it, then the film's closing sentiments about the eternality of vengeance will surely do the trick.