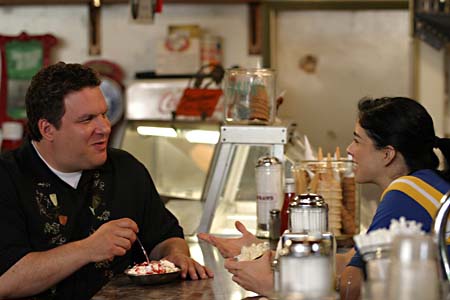 I Want Someone to Eat Cheese With

Well, who doesn't … want someone to eat cheese with, and more? Garlin wrote, directed, and stars in this endearing schlub-in-Chicago movie, which is based on his solo stage show of the same title. There's not much to the film: It's a rambling tale of a 39-year-old, lonely, overweight, underemployed actor who lives with his mother. Scenes have an improvisatory feel, which is generally a good thing since Cheese relies heavily on the on-the-fly talents of former Second City comedy troupers and other familiar comedians. Best known as Larry David's manager and partner in sarcasm on Curb Your Enthusiasm, Garlin forges his own comic path here and the tone is decidedly gentler. Garlin plays a character named James who just wants someone to love and to love him back – and perhaps the title role in an upcoming remake of the Ernest Borgnine movie Marty (a movie that mirrors his own life but has been cast inscrutably with pop idol Aaron Carter in the lead). James eats compulsively, hasn't had sex in five years, and is dropped by his agent for quitting a hateful role on a demeaning reality show. One day he leaves his Overeaters Anonymous meeting and heads to an ice-cream parlor, where he meets Beth (Silverman), a kooky gal whose interest in James isn't as wholesome as it first appears. James also meets schoolteacher Stella (Hunt) in a record store where they both vie for the same Ben Webster album. There's not much more to the movie than this peripatetic urban romance with women, food, and acting. However, Cheese works like a charm because it never tries to be more than it is. It's a movie for the Martys of this world who never get the spotlight. The film is visually bland and hits a few comic dead ends, but there's an element of pathos that allows us to believe in the plight of the fictional James. Accompanying James on his daily rounds is like keeping company with a comfortable friend. 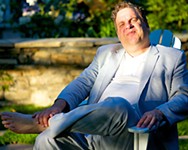