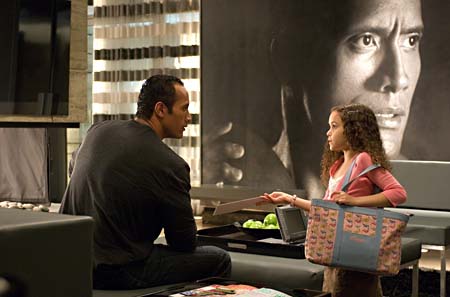 How’s this for a movie slogan: “The Rock Cries!” Maybe it doesn’t have the same ring to it that “Garbo Laughs!” did when Ninotchka was first released in 1939, but dammit if it isn’t something remarkable seeing a professional wrestler – that rare breed of performer practiced exclusively in the art of solipsistic Sturm und Drang – put away his muscles and turn on the waterworks. It’s like watching middle-American machismo itself wilt in your hand. The reason the Rock is crying is because he’s playing a self-centered superstar football quarterback named Joe Kingman whose perfectly empty, materialistic little life is being turned upside down by an 8-year-old daughter he didn’t know he had. Little Peyton (the absurdly doe-eyed Pettis) is infiltrating his Boston penthouse apartment, messing with his stereo settings, scaring away his dates, and generally making a mockery of his bachelor’s paradise. And despite all his years as a sports hero, Kingman isn’t exactly trained to look after a precocious little girl who’s more interested in ballet than forward passes and who has her mind set on turning this cold mountain of a man into a loving dad. But he’s got her for a month, like it or not, and no amount of eye-bulging, shirt-ripping, or muscle-flexing is going to make her go away. The Game Plan was written by two women, Nichole Millard and Kathryn Price, and their female take on the world of professional football – though ridiculous – gives their movie a comic flavor that is refreshingly free of the masculine chest-bumping that defines other football films (and football in general). The movie’s locker-room scenes (usually bastions of misogyny and towel-snapping homoeroticism, undeclared) are a woman’s fantasy of what constitutes a football team: two dozen sweet, sensitive, smiling, muscular metrosexuals in extremely tight pants who’d rather spend their time at the ballet or engaging in the occasional giggling water-gun fight than snorting cocaine or sleeping around. So the movie’s got something new and different going for it. Not much, but something, and it’s just enough to keep you interested and vulnerable so that when the syrup starts to pour, you realize too late – like an insect in a pitcher plant – that you’re unable to squirm your way free and run for the hills. Which is exactly what happened to me. Like some sentimental fool, I allowed Johnson’s good-hearted buffoonery and Pettis’ overpowering sweetness and Millard and Price’s unwavering belief in the healing power of love to get the better of my senses and travel straight past my brain to my heart. I’ve been got and I’ve been had. And I admit that with all due shame and humiliation. I’ll never forgive myself for this.