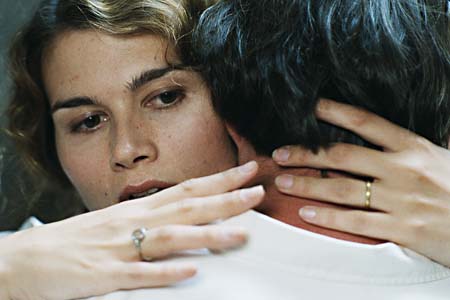 This new French version of the D.H. Lawrence story about the upper-class lady who discovers sensuality with her gamekeeper is tastefully presented but not nearly as scandalous and coarse as the published novel. That's probably because the film is based on John Thomas and Lady Jane, the second of three Lawrence versions of the eventual novel. Although the film includes equal measures of male and female frontal nudity, none of the novel's profane language is present here, and the film seems to pay more attention to the relationship's development than does the novel. Hands and Coulloc'h are both excellent as the two lovers, and the film exploits their contrast in body types. It's a bit odd to the American ear to hear French-speaking actors playing English country gentries, but that's more the viewer's problem than the film's. Although the cinematography favors soft-focus, Lady Chatterley's pastoral settings are lovely to observe – which is good because at nearly three hours of running time, there is a lot of greenery to see. Despite its generous length, the film still manages to have an episodic feel, with intertitles occasionally necessary to explain the passage of time. Touches of Lawrence's attention to class distinctions are present in this film, and overall, it's a hard film to fault: Lady Chatterley is the recipient of six César Awards, France's equivalent of the Oscar. Although the film is capable of sustaining our interest throughout, the viewer may find it lacking in some of the transcendence Lady Chatterley's lust is supposed to inspire.