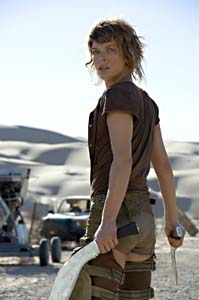 If I hadn't been viscerally reminded just a few days ago of the sheer creative power of George A. Romero's zombie mythology (Diary of the Dead, his latest ghoul's night out, played at Fantastic Fest), I'd probably be more inclined to say, "Not half-bad" to this third cinematic installment of the popular apocalyptic video-game series. But compared to Pittsburgh's finest, the script work on Resident Evil: Extinction (courtesy of screenwriter and sometime director Paul W.S. Anderson) is strictly point-and-shoot. Bioengineered superhuman Alice (kicky series regular Jovovich) continues to leave the living dead dazed and confused via bullets and body blows. The last film's epic ending, which left Raccoon City (the home of the Umbrella Corporation's zombie crisis), a smoking, radioactive ruin, wasn't in fact the end. In a twist lifted from Return of the Living Dead, the virus has spread beyond Raccoon City to infect the entire globe. (And not just its human populace, either.) After hooking up with survivors of the last film, who are traveling cross-country in a Road Warrior-like convoy, Alice and company set their sights on the allegedly undead-free Alaska but not before a petrol pit stop in the now-Sahara-esque Las Vegas. Director Mulcahy stages the action set-pieces with vigor and begs, borrows, and steals bits and bobs of other, better apocalyptic cinescapes (such as Hitchcock's The Birds) with wild abandon. Say what you like about the Resident Evil series as a whole (I certainly have), but Extinction rarely lacks for action. It's unlikely ever to amount to even a shadow on the rotting visage of one of Romero's sociological gut-busting zombie epics, but through sheer dint of workmanlike chutzpah, this cheeseball series has accumulated its own down-and-dirty brand of fun. Almost all of it has to do with watching the occasionally nude Jovovich look absolutely smashing in duster and sidearms, but sometimes, let's face it, that's not enough. 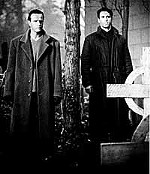