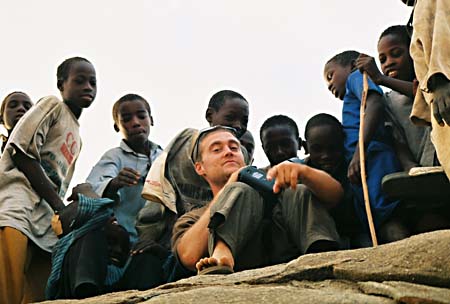 The Devil Came on Horseback

Even the Bush administration acknowledges that there is genocide in Sudan. Almost half a million people are dead, and 2 million more are homeless. But what is shocking isn't that it happened but that it continues unabated. We know President Omar al-Bashir’s army supports an armed militia known as the Janjaweed – actually, it means “devil on a horse” – and that they burn villages and massacre civilians with his blessing. The western province of Darfur is ripe for petroleum exploration, and its people, predominantly Muslim but non-Arab, are seemingly disposable. We know these things because of Brian Steidle, a retired Marine captain and “military observer" – armed only with a camera – stationed in the region. Had Steidle not followed reports of attacks and photographed their grim aftermath, we might not know anything at all: Neither journalists nor the United Nations are allowed in Sudan. By focusing on Steidle’s story, Stern and Sundberg (The Trials of Darryl Hunt) put a plain, honest American face on the issue; we see him evolve from a dutiful and trusting soldier (“If these photos were released to the public, there would be troops in here in a matter of days,” he wrote to his sister in 2004) to a disenchanted grassroots activist who alleges that the State Department attempted to suppress his photographs. Steidle’s story gives the film’s explication of events a pleasing narrative shape, but it also establishes that the global community, like Steidle, has stood by watching powerlessly. (At one point, Steidle surveils two Janjaweed trucks departing a scene of carnage and longs to be looking down a scope instead of his camera.) The second half follows Steidle’s evolution into a spokesman for the cause; it’s slower and messier, and while parts of it don’t quite seem to fit together (a detour into Rwanda, awkward endorsements of Barack Obama as the Darfur candidate), there are interesting moments of Steidle under pressure as his mission proves seemingly futile. Just the same, the film’s approach suits an audience broader than the usual documentary crowd, though it’s worth mentioning that those pictures can really stay with you. 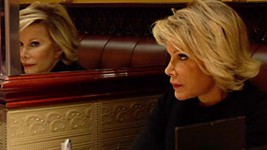 Joan Rivers: A Piece of Work
This documentary is a softball, entirely sympathetic, and wickedly funny portrait of the artist at an advancing age.

The Trials of Darryl Hunt
...