The Brave One is a confounding movie on many levels. For all its sophistication and sensitivity, it turns out to be little more than an upscale B-movie about getting even. This revenge fantasy is set in motion by a senseless act of horrendous violence: Erica Bain (Foster), the host of a New York City radio program, is brutally beaten along with her fiancé while walking their dog one evening in Central Park. She survives; he doesn’t. In recovering from this horrible experience, Erica falls out of love with her beloved city and hardens into an avenging angel armed with a handgun, stalking the nighttime streets of Manhattan like some stealth superhero dispensing her own brand of justice. She goes Bernie Goetz on the subway, dispatches a pimp like Travis Bickle, and finishes off a sleazy bad guy like Dirty Harry reincarnated. Each time Erica exacts her vengeance on the criminal element, you’re not sure whether to cheer or recoil. The Brave One seems to want it both ways: It stirs up emotions that justify Erica’s lawless actions but doesn’t flinch in depicting the terrible psychological price she pays with each killing. Foster is very good as the conflicted Erica, subtly detailing her character’s transformative journey into the heart of darkness without losing the humanity of this lost individual. When Foster looks in the mirror during the course of the film, you can see Erica realizing, with a mixture of fear and fascination, that she is becoming a person she no longer recognizes. Unfortunately, the plotting in The Brave One is rather pedestrian and often flawed, undermining this film’s potential for greatness. The absence of eyewitnesses to most of Erica’s killings is too convenient, and the platonic relationship that develops between Erica and the police detective investigating the vigilante murders (an empathetic Howard) is contrived. By the time the big moment arrives when Erica faces the three hoodlums who murdered her great love and irreversibly changed her life, it’s clear what kind of movie The Brave One ultimately wants to be. Without giving anything away, let’s just say that the film’s title is completely drained of any remaining irony at this point, abandoning intellectual honesty in favor of giving the people what they want. 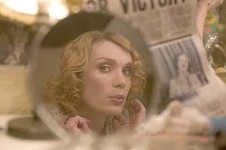 Breakfast on Pluto
In this latest from Neil Jordan, Cillian Murphy plays the swinging transvestite Patrick "Kitten" Braden, who wanders through and into the pop-and-politics culture of Seventies England.